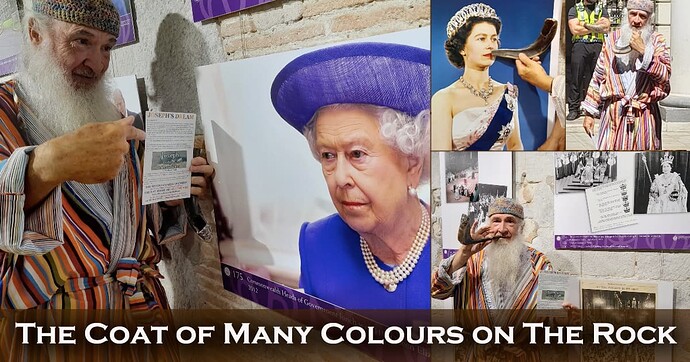 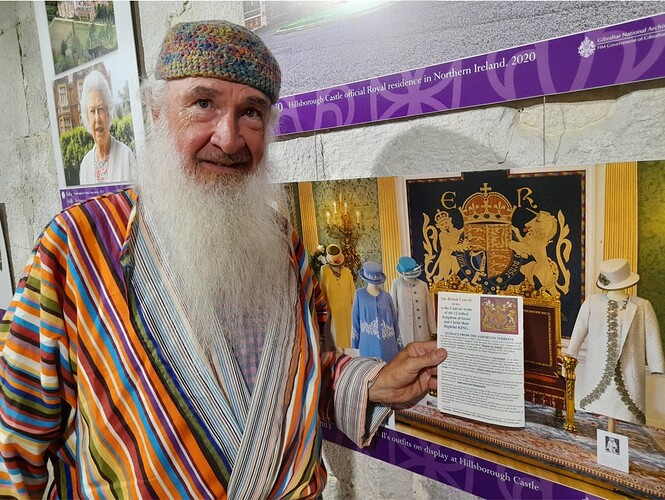 Yesterday, while The Rock was bathed in glorious sunshine at the tail end of the merry month of June, The Wandering 'Brew (Hebrew), changed his normal sartorially blue coloured dress, and donned instead, his coat of many colours, which had just had been unexpectedly dispatched to him from Ireland, and ventured out into Casemates Square. Armed with a shofar, about 120 A5 sized glossy Joseph Booklets, a karaoke sound system, and a very cheerful recording of a special Billy Connolly rendition of The Coat of Many Colours, The Wandering 'Brew soon surprisingly stumbled upon Elizabeth Battenberg's Platinum Jubilee Exhibition held at the Gustavo Bacarisas Gallery in Casemates.

The Wandering 'Brew, aka Tony Farrell had one of his English brothers with him. He calls his English brother George, after the Patron Saint of England. Together, George and Tony spent an enjoyable half an hour in the gallery exhibition, while taking some carefully selected photographs germane to the occasion, while The Wandering 'Brew was armed with a small ram's horn and colourful Joseph booklets signposting The Little Book of Revelation 2.17.

Revelation
2:17 He that hath an ear, let him hear what the Spirit saith unto the communities; To him that overcometh will I give to eat of the hidden Manna, and will give him a white stone, and in the stone a NEW name written, which no man knoweth saving he that receiveth [it].

After comparing his own colourful coat with the many different coats on show of Elizabeth, The Wandering 'Brew quickly and more importantly zoomed in on The British Coat of Arms signifying the Coat of Arms of The Twelve Tribed Kingdom of Israel, and Christ their Rightful King. See exhibit above. 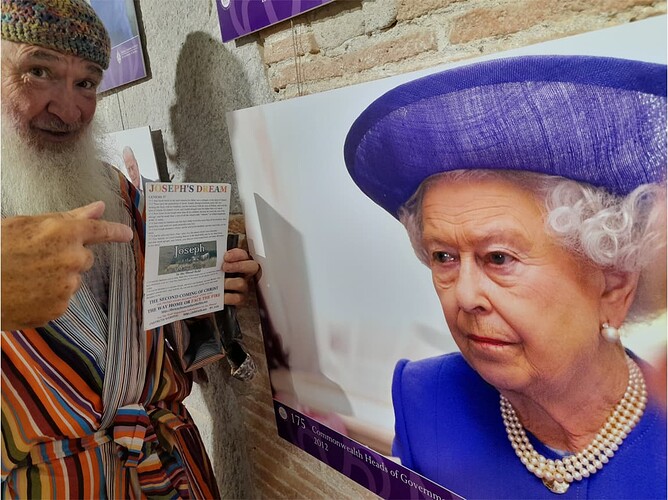 The Wandering 'Brew drew Elizabeth's attention to the Joseph Booklet and The Second Coming of Christ.

The Wandering 'Brew even tried to encourage Elizabeth to blow the shofar, but unfortunately it soon became clear that young Elizabeth's lips were sealed much too tight on The Coronation day of 2nd June 1953. 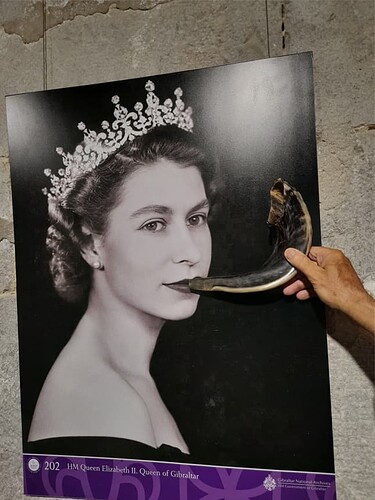 And so it came to pass that The Wandering 'Brew tried a second time in an effort to help Elizabeth make the sound of the shofar, only this time with a thirty-three year old monarch, but beneath all the paraphernalia Lizzy's lips were still sealed much too tight to make the required reverberation. 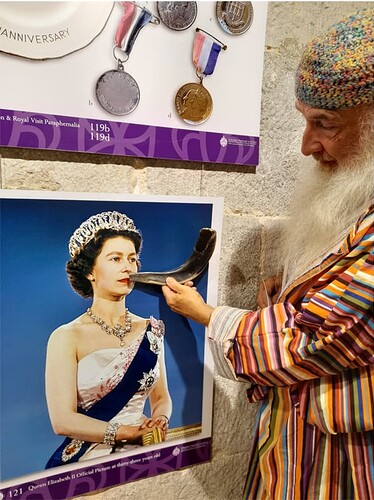 And so it came to pass that The Wandering 'Brew tried a third time, and turned instead to a much more elderly Monarch, and while her lips were encouragingly parted, there was nevertheless insufficient puff left in her lungs to make Big Tiny's ram's horn reverberate. 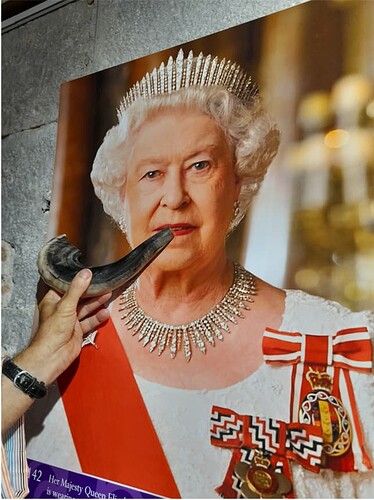 A fourth and final attempt to overturn the situation was tried using a bit of extra horsepower from a decade ago, and while her lips were apart, there was tragically only the sound of silence to be heard. 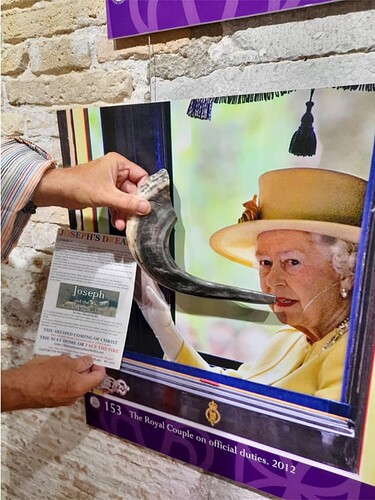 During the course of wandering around the exhibition, while at some considerable distance away, one of the exhibitions suddenly slipped from the gallery wall, and George and I both were convinced that that was done with Father's help. The Writing on The Wall, The Wandering 'Brew asked himself in eerie astonishment. 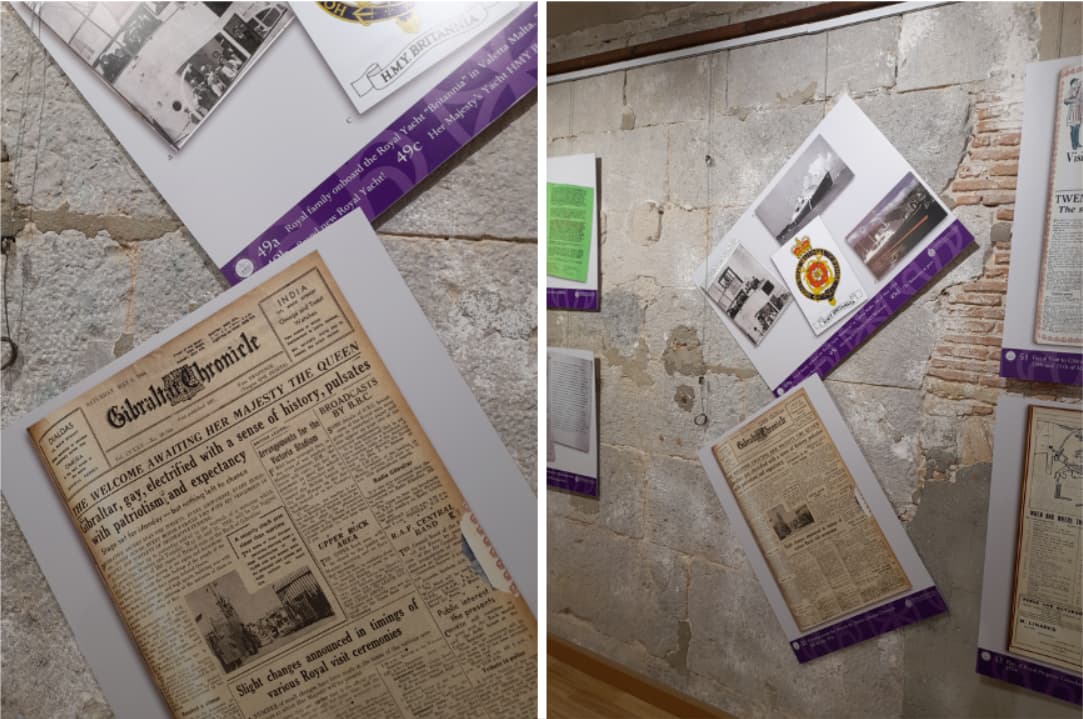 Besides posing for pictures at the gallery exhibition, The Wandering 'Brew could be seen and heard yesterday out and about at a dozen or so different strategic locations, as itemised below. 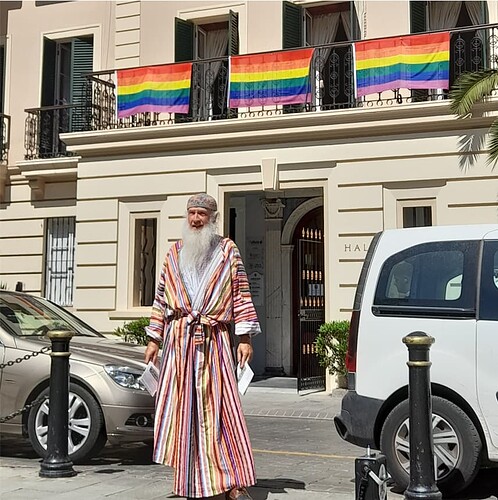 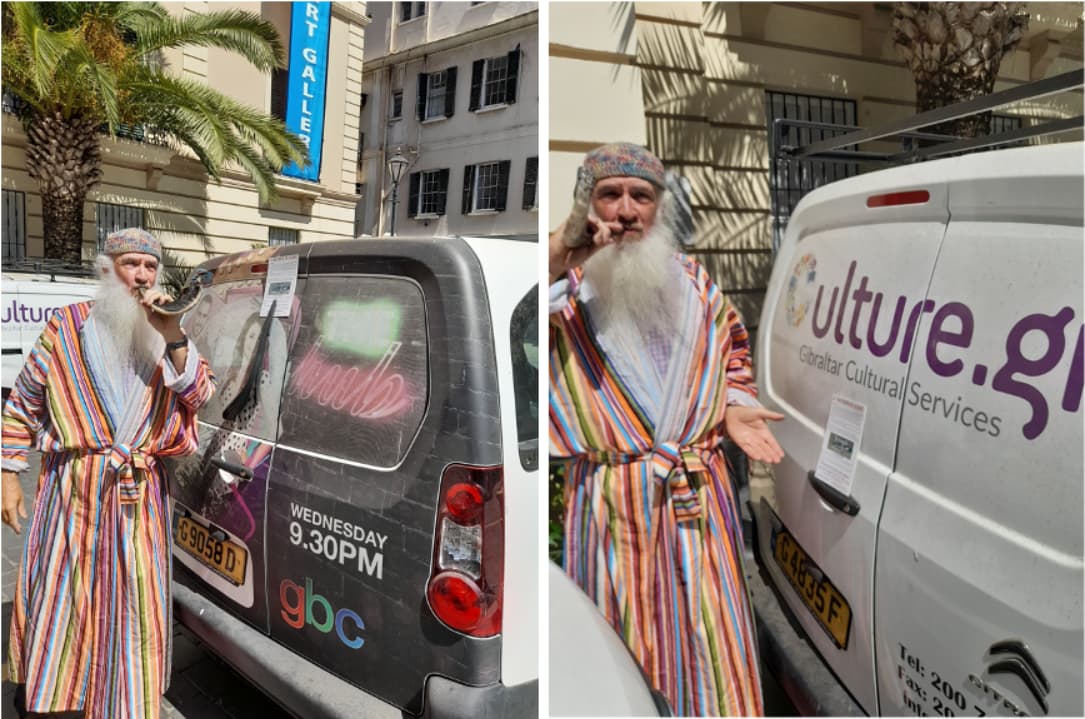 STATION 3 - THE FRONT AND BACK OF THE PARLIAMENT BUILDING 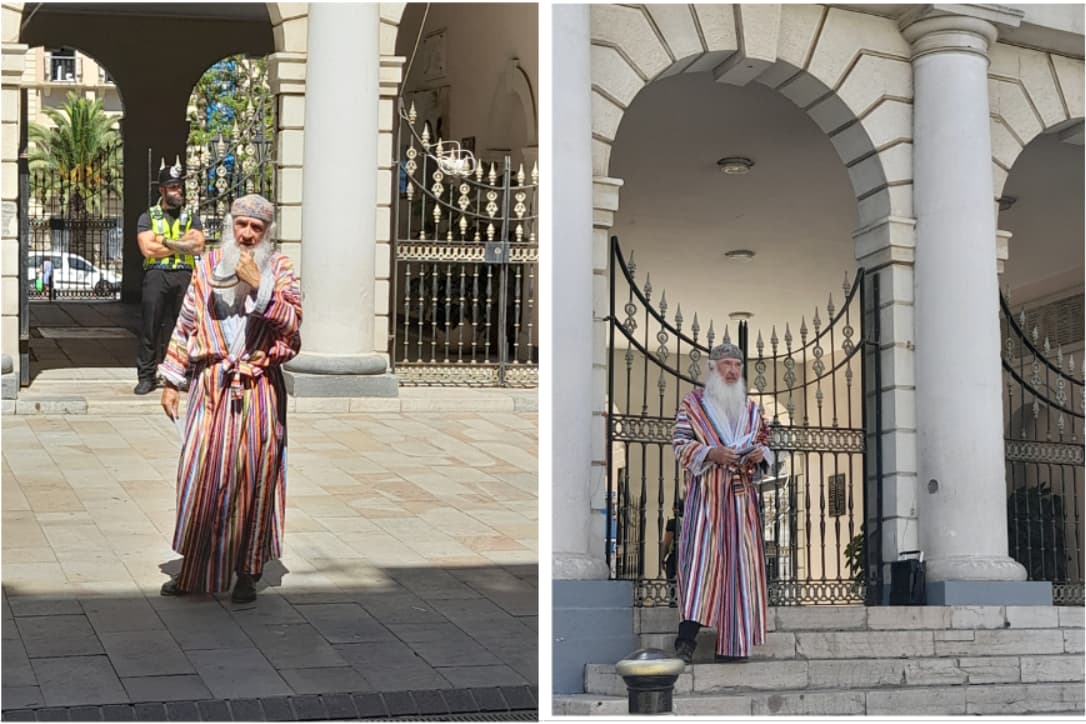 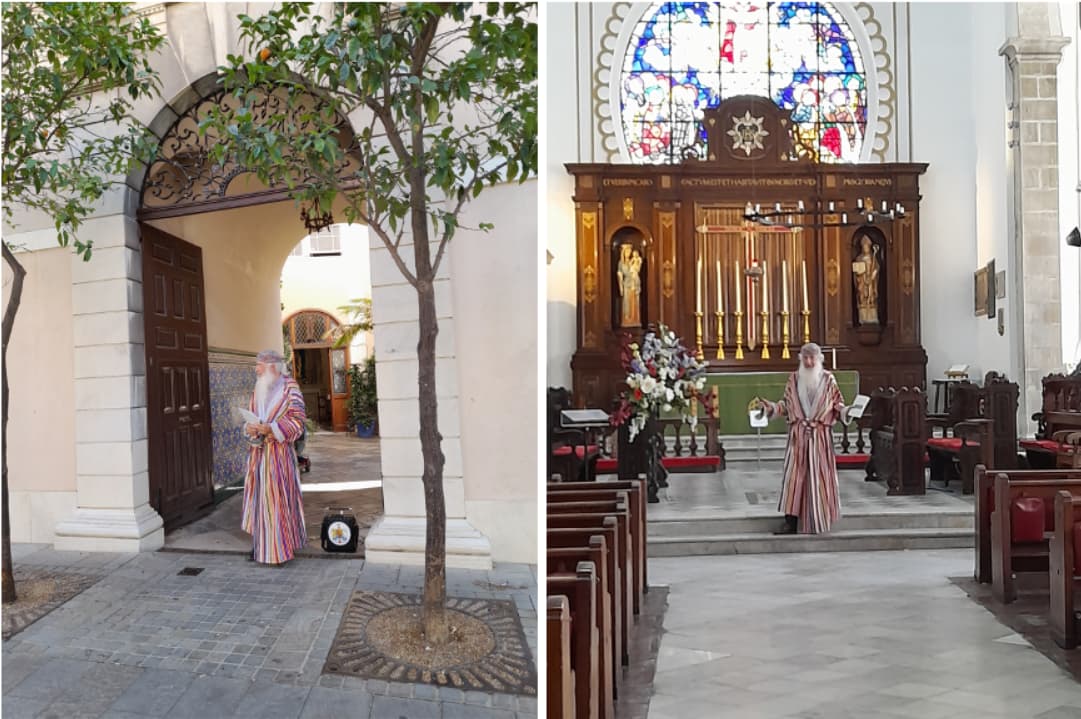 STATION 5 - THE GARRISON LIBRARY WHERE THE PRETEND JUDGE, FORMER HIGH COURT JUDGE PETER OPENSHAW, IS CARRYING OUT THE PUBLIC INQUIRY INTO THE EARLY RETIREMENT OF FORMER COMMISSIONER IAN MCGRAIL 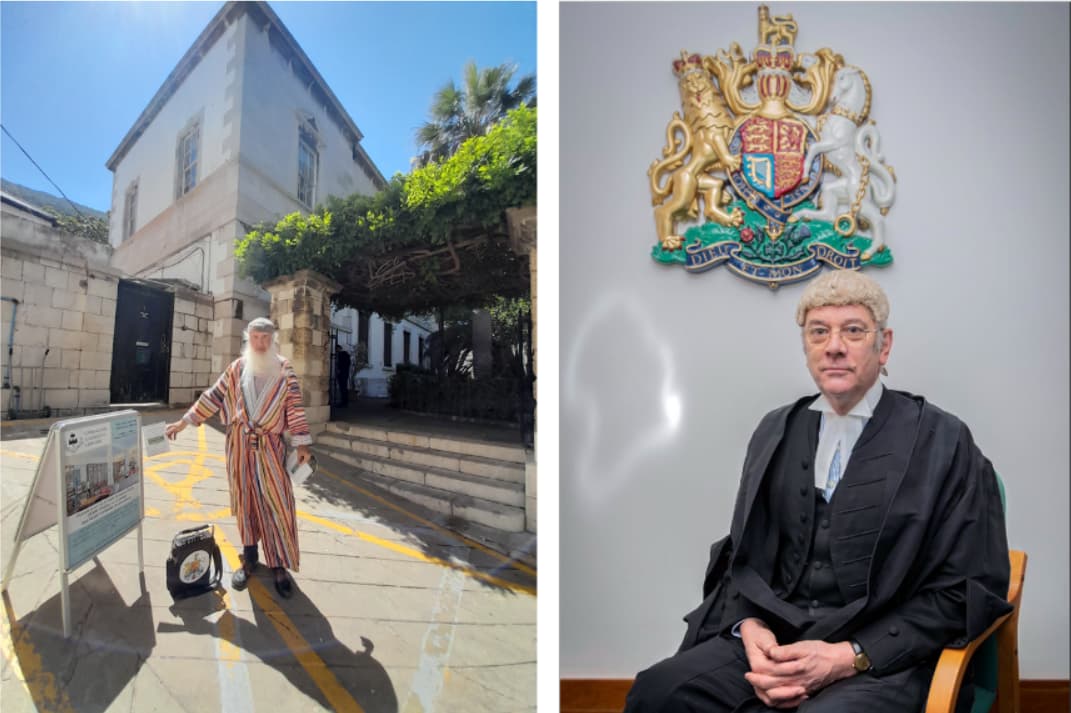 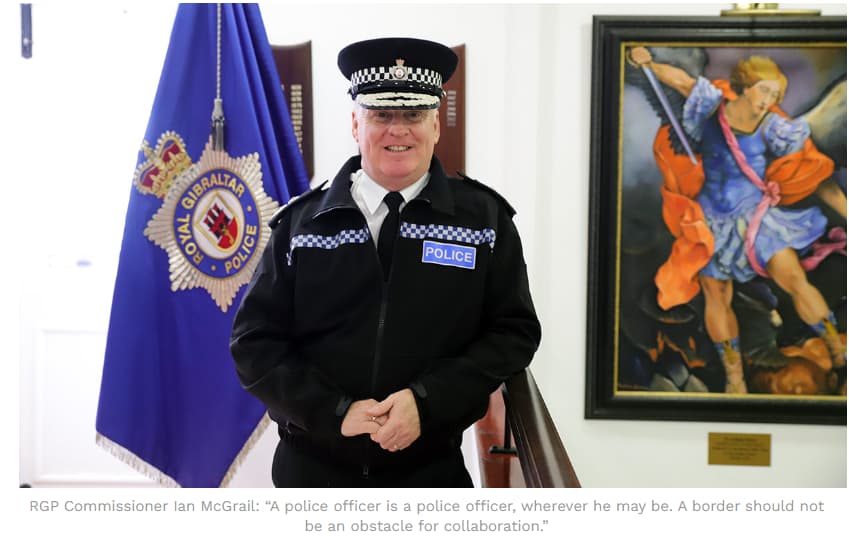 STATION 6 - THE SCOTTISH CONNECTION ON STONE 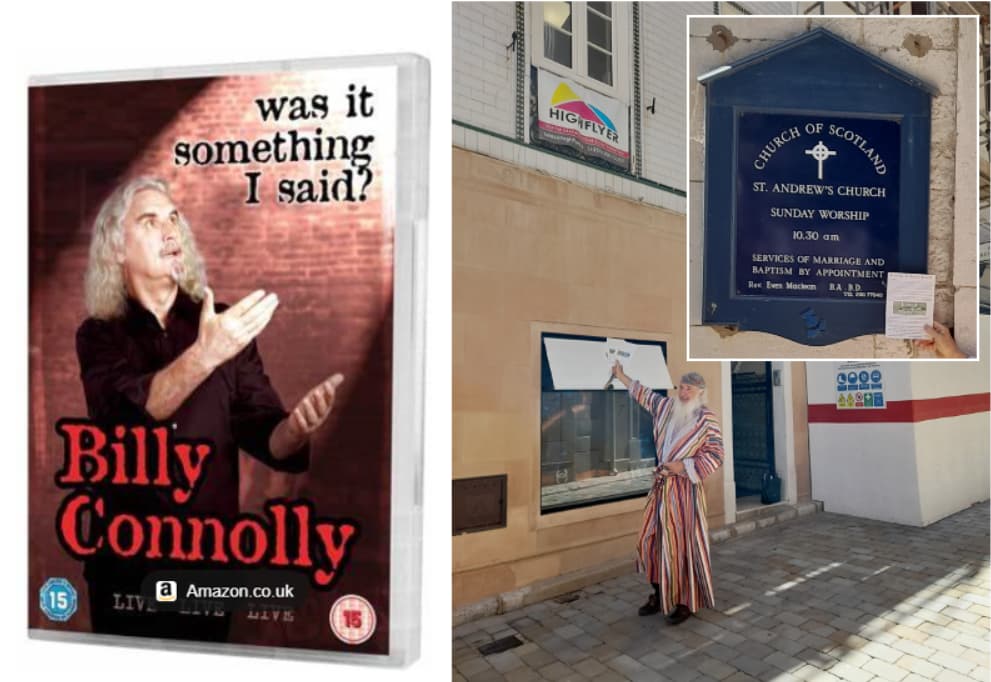 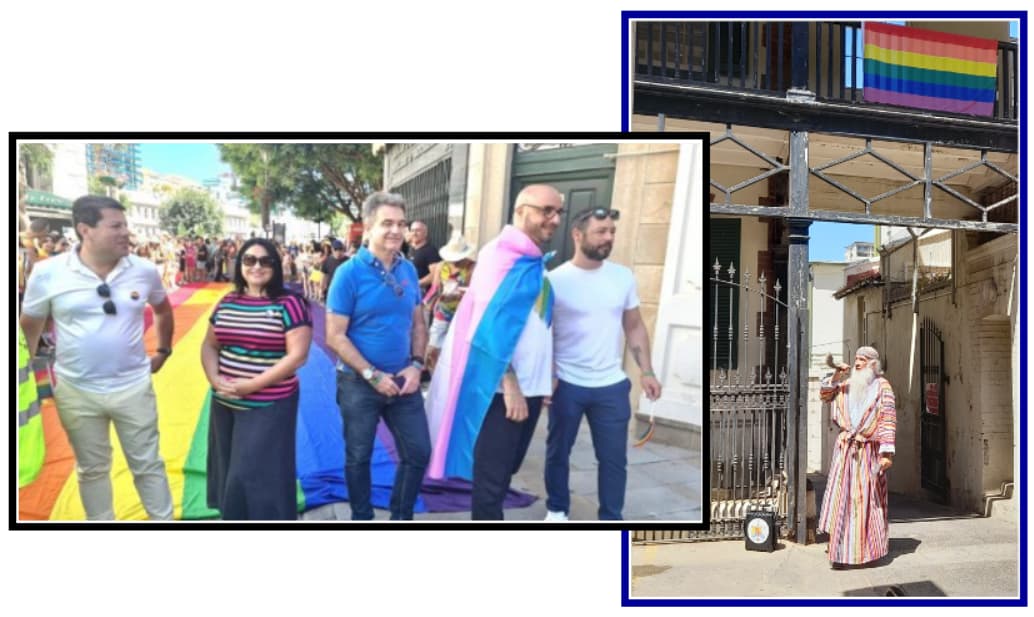 STATION 9 - THE COURTS OF INJUSTICE 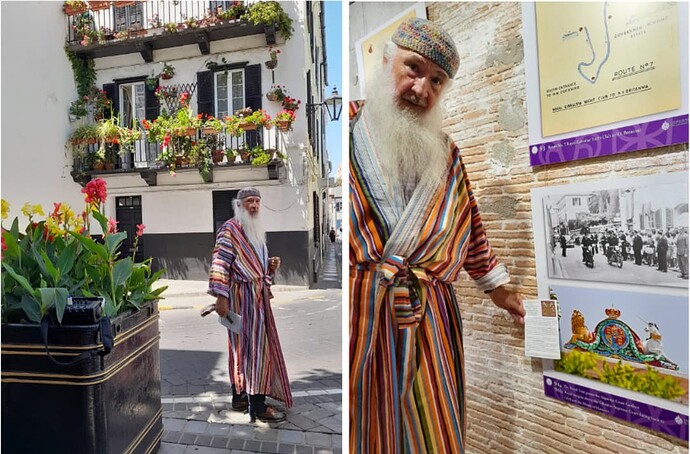 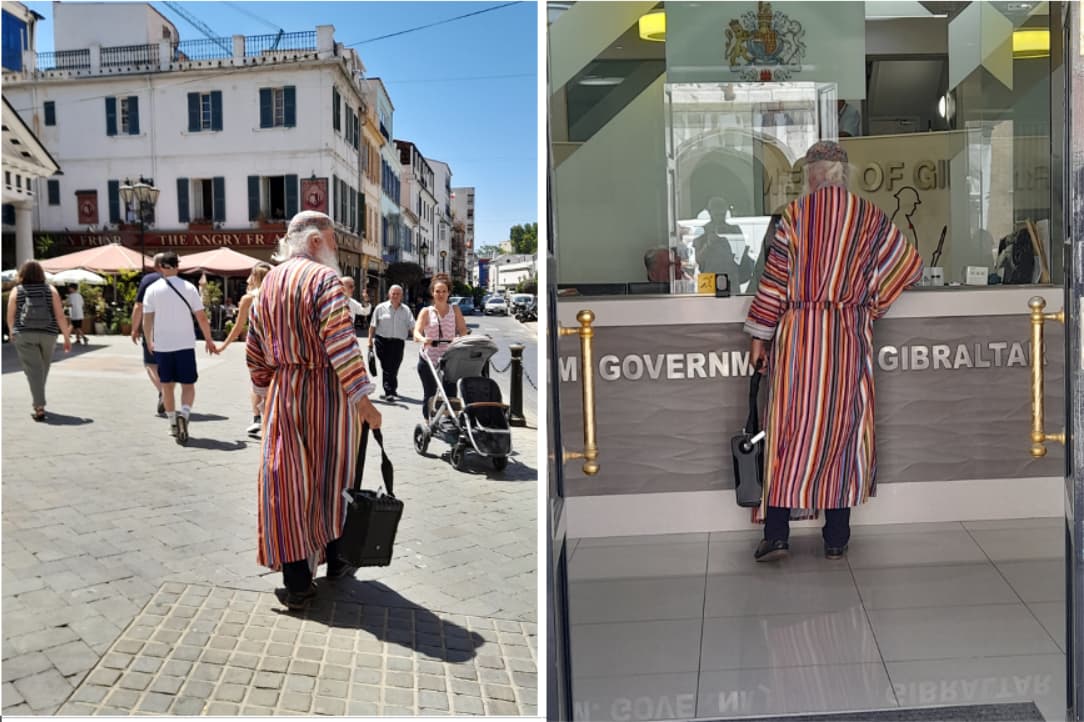 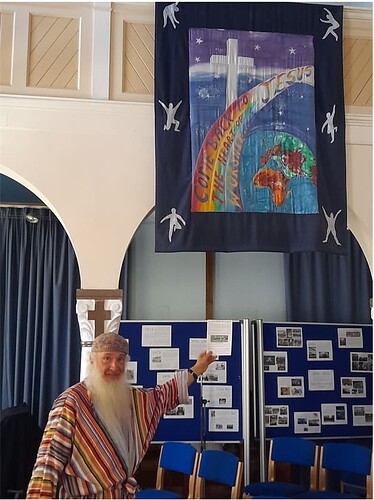 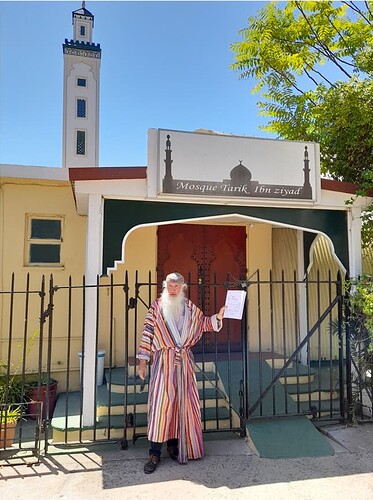 Please read Surah 12 for The Joseph Story as depicted in The Koran.

STATION 14 - THE SYNAGOGUE AND THE HOLOCAUST MEMORIAL 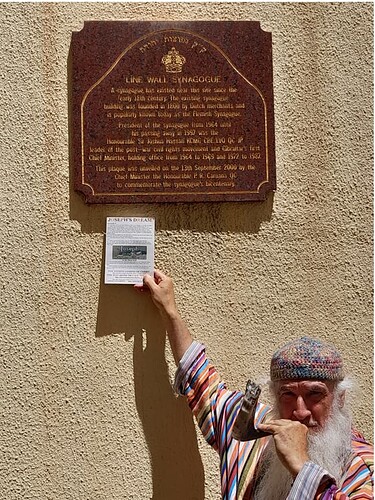 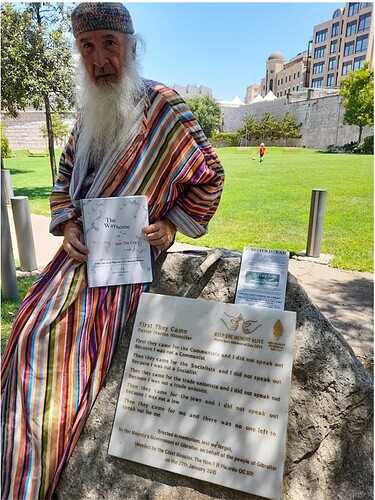 Finally, please don't forget to listen to and watch Billy Connolly's rendition of The Coat of Many Colours as repeatedly played on The Rock of Gibraltar yesterday. 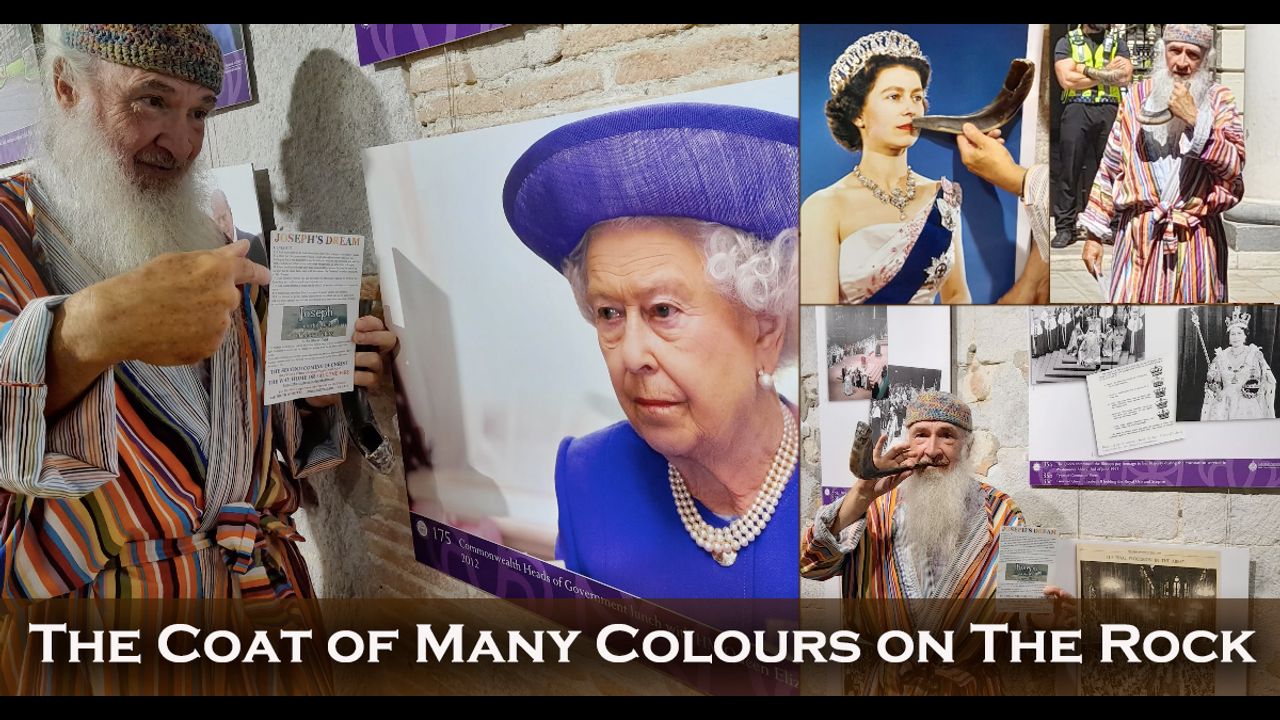 The Coat of Many Colours on The Rock

Dressed as Joseph with his coat of many colours, I wandered about The Rock of Gibraltar on 29 June 2022. With Dolly Pardon's "Coat of Many Colors" sung by Billy Connolly in tote and a stack of "Joseph's Coat of Many Colours" booklets, I first visited...

Thank-you. Love the work you are all doing. Beautiful attire (coat) of many colours

@SleuthER95 ,
You are certainly welcome.

Good Sabbath morning to you all.

This is just to say how immensely useful the current exhibition about Elizabeth is proving to be at the Gustavo Bacarisas Gallery. Thank-you.

While in there the other day in my coat of many colours, looking at the displays for the very first time, George and I were actually present when one of the displays, slipped from its frame before our very eyes, when we were both stood at some distance away from it. It felt supernatural, as if it was a message from Father.

If you check this article out below, perhaps the display to which I'm referring and the reason for its slip, might just become clear to you.

I may pop in later today, just to check if that particular display has been fixed back to its frame.

I had the great pleasure of visiting your exhibition a few days ago, and followed that visit up by finding out a little about who was be behind it all. In the process, I stumbled across this photograph below of you standing before the portrait of queen Victoria. 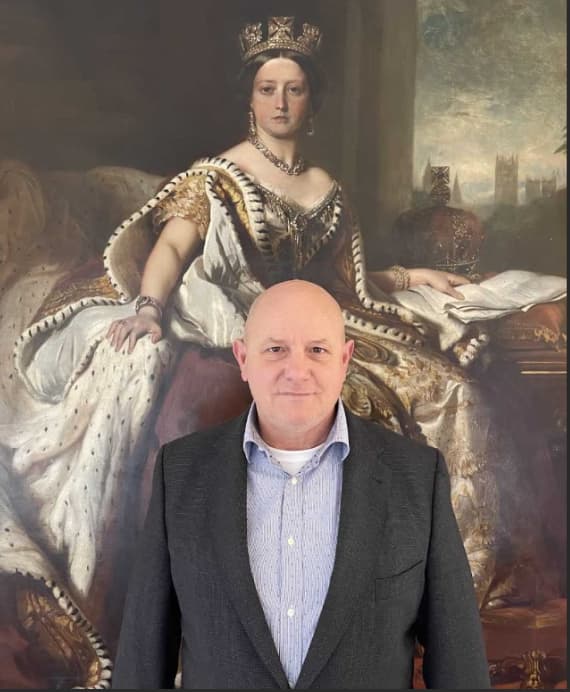 Firstly, I wonder if you are aware of how the exhibition was utilised to good effect in an attempt to heighten awareness upon The Rock, as to the real meaning of The British Coat of Arms and The Coronation Throne.

Secondly, as a direct result of stumbling upon the photograph of you pictured before Victoria, I thought this fairly recent article, as published on the Defending Gibraltar website, which was in the form of an open letter to The Governor of Gibraltar, David Steel, might be of real interest, too.

Sincerely, I hope you as an historian, find the ancient history of Gibraltar as fascinating as we do, especially the really important bit about the great thing which happened on The Rock of Gibraltar way back when, in and around 588BC.

A Brief Summary of The Book of Tephi, queen of Tara and Gibraltar (jahtruth.net) 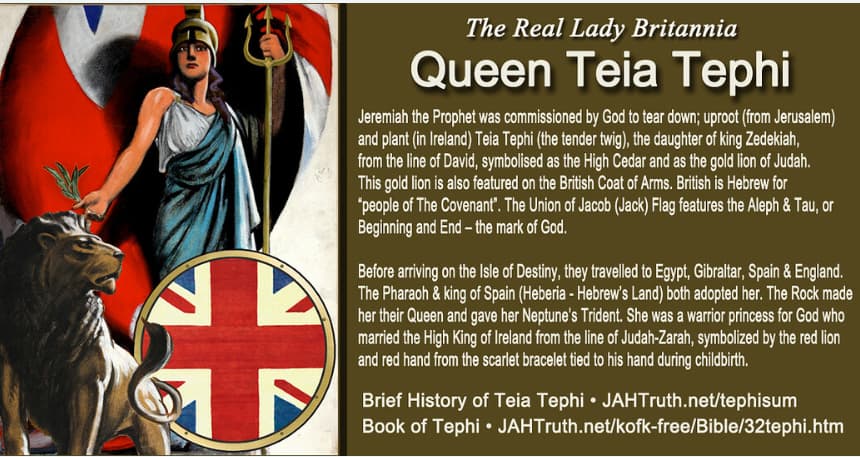 Gibraltar is an important and significant place; past and future. 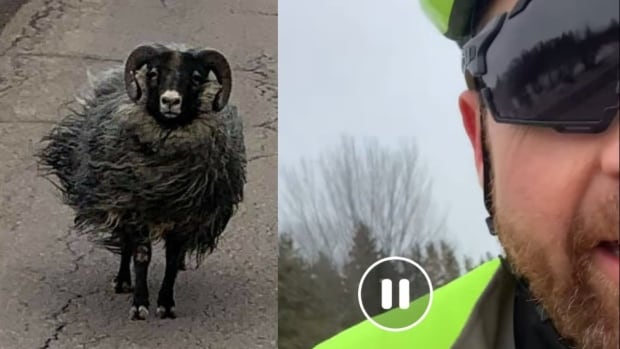 Last week, Thunder Bay-based cycling enthusiast Keith Ailey had the strangest bike encounter after being chased by a black sheep ram just west of the city.