A Brave Italian Doctor's Warning To ALL People (Video)

A Brave Italian Doctor’s Warning To ALL People
Don’t Get Tested, Refuse The Vax - ‘Covid’ Is The
Name Of The Plan Of Worldwide Mass Depopulation

Link - How to Lawfully Decline a Vaccine

Thank-you! “Certificate of identification of vaccination w/artificial intelligence”. An eye-opener!

Thank-you! “Certificate of identification of vaccination w/artificial intelligence”. An eye-opener!

The video is also available on Bitchute: 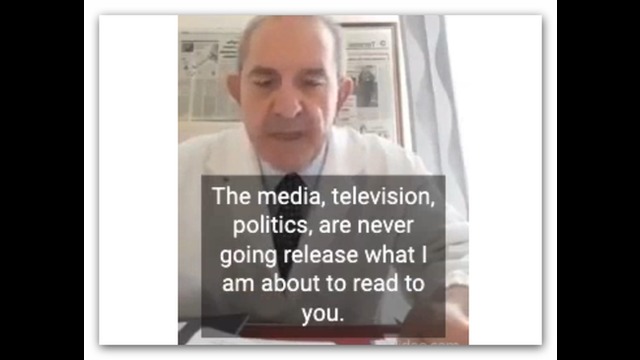 More on the dangers, in this article:

Dr. Petrella and the Dangers of the COVID Operation - Mark Taliano

What do we know? We know that the tests do not work but governments pretend that they do. We also know that some vaccines sterilize people. Warp Speed vaccine preparation almost guarantees vaccine injury, plus it is an entirely new DNA altering... 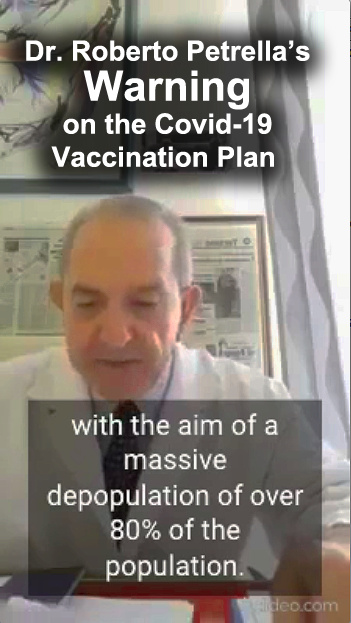 Here is a transcription of what he said in this video, which may help people with limited Internet access to know what he said; while others can use it to quote him:

So there is this document, which I am about to read to you which not only must you disseminate 0.10: but take note of it.

The media, television, politics, are never going to release what I am about to read to you.

Covid-19, means the “certificate of identification of vaccination with artificial intelligence” and “19”, it is the year in which it was created.

Covid-19 is not the name of the virus, pay attention, it is rather the name of the international plan for the control and reduction of populations which has been developed over the last decades and launched in 2020.

What reactivates the virus, is the immune ground in which it finds itself weakened by former vaccinations.

What they intend to inject inside of us, is going to be the most terrible vaccines of all.

It is literally a descent into hell, with the aim of a massive depopulation of over 80% of the population.

Do not take the tests: the tests are not reliable.

I have always said it, and will repeat myself, just like many tests producers also affirm: none of the tests are able to accurately detect the Sars Cov-2 virus. They only detect an infinity of small harmless viruses or cell debris which are naturally already part of our microbiota.

The people tested will increasingly appear positive in tests (about 90%).

This is their goal, and this is why they started the testing process with children.

On May the 11th, no television, nor newspaper, or Italian/Berlusconi broadcast announced that in France mass testing was being imposed in all schools. There were about 700 thousand tests every week. However, nobody, unfortunately, broke this news.

So, once your child gets screened, the whole family, and all immediate contacts, will be forced to be screened.

Do not listen to the charlatans, the ignorant, who reject the truth.

I remind you, that we are not sick; we are, on the contrary, just healthy carriers of this virus. Having the virus does not necessarily mean that you are sick: you healthy and fine. But everyone will still appear, pay attention, positive in the tests.

In fact, they make you repeat the tests 2 or 3 times. All public facility employees, especially in the health care sector, take the tests every month.

All they need to obtain is this: make everybody believe that they are sick. Being positive means being labeled as harmful.

Pay attention Italians, listen to me.

Refusing the detection of the virus, is the only key to avoid being vaccinated.

Once vaccinated, we will all be severely sick, weakened, and we will certainly be lead towards our death.

The only one solution, to save our humanity, but above all to save us Italians, it is to make people truly understand that they should not be tested.

Do not get yourself tested, do not give them what they lack of, do not fall into their trap.

I’m telling you this, because at least you won’t be able to say that you haven’t been warned.

Don’t get yourself tested, it’s the only way to save yourself.

On television, these bastards don’t and won’t ever tell the truth.

Nevertheless, the Health Deputy Minister is himself a doctor.

Colleague, you must only, and deeply be ashamed of yourself.

Most non-vaccinated people will ceases to exist for society.

This is already happening in some Chinese cities.

And Spain is one of the main test driver countries along with Argentina and all Latin countries.

Everything has already been set up and activated in all companies and Media for mass vaccination.

I will prefer death, absolutely not vaccination.