WHAT IS PICARDO’S TREATY DANCE?

WHAT IS PICARDO’S TREATY DANCE?

Something that comes through from the Chief Minister, Fabian Picardo’s, address to Club Siglo XXI is that he is dancing to a tune from an admitted position of the economic necessity of Gibraltar, w…

Something that comes through from the Chief Minister, Fabian Picardo’s, address to Club Siglo XXI is that he is dancing to a tune from an admitted position of the economic necessity of Gibraltar, with the selling point being the benefit to the immediate hinterland.

Whatever the tune he dances to is, we must support and encourage him to pursue it to success, in the form of an EU-UK treaty benefitting Gibraltar and the Campo de Gibraltar (“Campo”).

The likelihood is that his dance is a ‘paso doble’ and not a lonely flamenco, as is indicated by his persistence on seeking dialogue and respect to achieve “mutual progress and prosperity”, not just for Gibraltar, but considering the knock-on benefit that Gibraltar prospering will have for the Campo.

A DYNAMIC FUTURE WITH NO SOVEREIGNTY COMPLICATIONS

Mr. Picardo advocates that UK-EU talks should result in a dynamic future for Gibraltar and the Campo, after Brexit, following on from close and cooperative dialogue between the UK and Spain, whilst respecting the long-held position of both sides on the issue of sovereignty.

He said as much in terms that Gibraltar “aspires to be an even more dynamic economic engine for the mutual benefit of all the inhabitants of the Campo de Gibraltar and Gibraltar itself.” It will lead, he added to “A decade of growth and job creation, a decade of investment in infrastructure and in policies of understanding,”

BUT ARE SOVEREIGNTY ELEMENTS NOT INEVITABLE?

Undoubtedly the framework agreement, in its expressed intention to emulate the Schengen Agreement for application in Gibraltar, and its desire to achieve agreement on freedom of movement of goods, both will result in some sovereignty being given up.

In the case of the UK those sovereignty compromises were considered unacceptable, as evidenced by the vote in the Brexit referendum. The UK has left the EU to regain full sovereignty over its affairs, wresting it back from Brussels.

The principles in the framework agreement evidence a good and acceptable position for Mr Picardo and the GSLP to adopt, but it is what it is. A treaty still needs to be negotiated between the U.K. and the EU. The final decision of each of us about any treaty needs to wait on its negotiation and publication.

One concern is that Mr. Picardo does not define what, for the GSLP, the boundaries of that sovereignty are, which he promises to defend. He simply uses the stock phrase that ‘red lines’ on sovereignty should be respected, including Spain’s claim to Gibraltar.

But what are these red lines, Mr Picardo? Will your diplomatic speeches on the subject of Spain allow for these to be defended, if the UK agrees within what it considers to be Gibraltar’s appropriate parameters, as outlined in your public pronouncements?

When, if ever, does cooperation and agreement with the EU, supervised by Spain, become joint sovereignty? That is one aspect where great care is needed.

If Gibraltar’s judgment is that the proposed treaty oversteps the mark, then the reaction may be overwhelmingly against it. An occurrence that must be avoided by Spain and the EU at all costs, if indeed there is EU support for the framework agreement. All that will only be seen when the EU negotiating mandate is made public.

Mr. Picardo now claims that “Gibraltar has always been a strong advocate of dialogue”. Really? He forgets the huge past resistance of the GSLP to even allow the UK to hold talks with Spain over Gibraltar.

A position from which the GSLP have, thankfully, moved forward in the right direction. Thus allowing Mr. Picardo to pursue the current negotiation.

WILL THE DESIRED TREATY RESOLVE THE DISPUTE?

He goes on to say that the effort is to “try to settle disputes with reason and not with headlines.” Where is that attempt, when he advocates that both sides reserve their respective entrenched position on sovereignty? Is that not the very dispute?

The situation is the same as the married couple who eternally live together, enjoying polite and respectful conversation, despite the irretrievable breakdown of their marriage. In time the breakdown is resolved, or the marriage dissolved.

Let us all hope, over time, that is not the destiny of any UK-EU treaty over Gibraltar that may soon come about.

In the meantime, let us welcome and work with Mr. Picardo’s optimism, illustrated by his statement that “The combination of the human and natural resources of the area and the entrepreneurial spirit of the ‘Llanitos’ and ‘Campogibraltarenos’ present us with the potential for future growth, more wealth and that ‘shared prosperity’ of which we have spoken so much.”

The question is whether the promise of wealth and prosperity will trump the desire of each side, in the treaty negotiations and beyond, to defend or advance their respective nationalistic and political ambitions in the sphere of sovereignty.

Further whether the UK Ambassador’s goal of “confidence, certainty and enduring stability” can be achieved for Gibraltar and its immediate proximity for the long term.

History shows us otherwise, but perhaps, and we must hope that, the newfound attitude of the Spanish government will win through amongst all Spanish political forces. The stunt carried out by Vox, at the start of Mr. Picardo’s address, indicates the opposite.

REALITY MUST REMAIN IN SIGHT

One must not, however, lose sight of the real world. In that world, either any treaty will lead the way to one party succeeding in its sovereignty ambition, or the other party having to meet head on the consequences of resisting that win in the future. The four-year time limit on Frontex manning immigration controls is a ticking clock in that regard.

A treaty, as envisaged, in the framework agreement is but a temporary patch on an ever-present 300-year-old international dispute. It does not deal with the fundamentals of the historical positions.

In the meantime, whether Mr. Picardo dances flamenco alone, or a ‘paso doble’ with Spain, both should be welcome. He should and must be encouraged to succeed in his mission, dancing politically and diplomatically, to the best of his ability for the good of all in Gibraltar and the Campo.

Let us hope Spain continues to see the current progressive process with the same eyes, as shown by it having entered into the framework agreement, and that the EU follow, in a double-partner dance.

[image] The municipal government team of La Línea de la Concepción, in the province of Cadiz, has taken another step in its aspiration for the municipality to become an autonomous community like Ceuta and Melilla, and will present the ordinary plenary session on July 8, an agreement to initiate the procedure that allows a popular consultation to take place. The report of this proposal, which will definitely go ahead, since the party that governs the Town Hall of this Cadiz municipality, La …

Anyone like to be a fly on the wall in this meeting?

Here is Vox's report on it -

Speech by Chief Minister at Club Siglo XXI in Madrid Chief Minister 'continues to be optimistic about entering into a UK/EU Treaty...

The Chief Minister says he continues to be optimistic about entering into a UK/EU Treaty that protects Gibraltar's interests.

Speaking to GBC, Fabian Picardo said it's important, however, not to allow this period of limbo, nor the EU's unacceptable draft mandate, to dampen the enthusiasm for an agreement.

On Frontex, he gave assurances that no-one from Borders and Coastguards will lose their jobs, as the Agency will continue to deal with Gibraltar immigration issues.

News Editor Christine Vasquez spoke to the Chief Minister and first asked him for his reaction to the Frontex trials at the frontier. 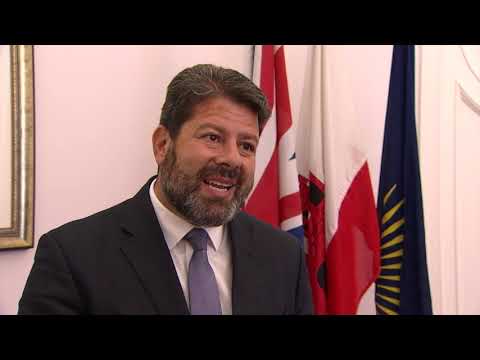