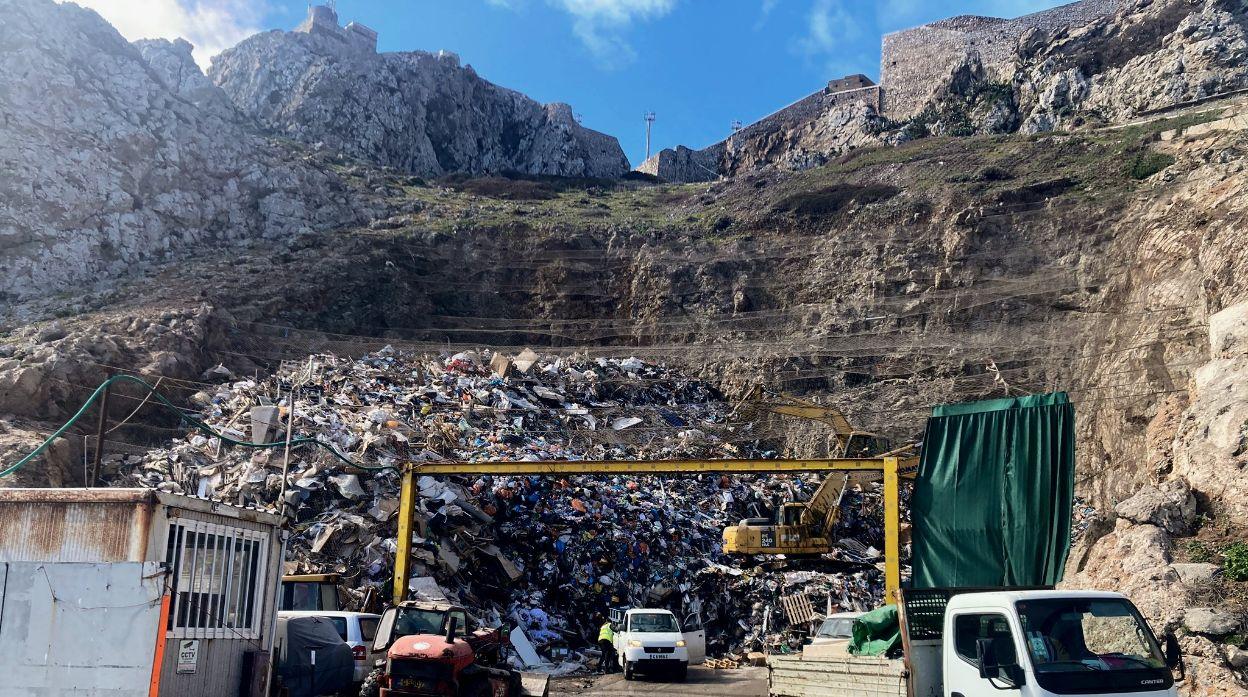 The environmental group hopes for solutions before the Strait of Gibraltar is affected by the situation.

Verdemar the environmental group from the Campo de Gibraltar asks the Junta de Andalucía whether it "is waiting for the plastic waste" accumulated in Gibraltar "to reach the Strait to solve the problem", regarding the rubbish piled up on the eastern side of the Rock.

"We call for a rapid solution to the rubbish accumulating on the eastern side of Gibraltar," the environmentalists insist in a note.

"Gibraltar has been managing solid urban waste for decades in the South of Europe Environmental Complex in Los Barrios", recalls the organisation. "For the last 15 days it has been accumulating by the sea, to the east of the rock of Gibraltar due to poor administrative management," they point out.

According to the ecologists, Gibraltar has been managing "for years 30,000 tonnes of domestic waste per year at the Urban Solid Waste Treatment Plant in Majadal de Bustos", where the South of Europe Environmental Complex is located.

"We denounce once again that more than 3,000 tonnes of solid urban waste is accumulating on the beach east of Gibraltar and the Junta de Andalucía is only putting obstacles in the way of solving the problem," laments Verdemar.

"These images take us back to the 1990s, when the management of solid urban waste in Gibraltar was out of control", insists Verdemar Ecologists in Action, which makes "a call to the administration to reach an agreement that guarantees good traceability of this waste before it becomes an environmental problem and we see all kinds of rubbish in the Strait of Gibraltar".

"We continue to believe that solving the problem by shipment to the UK will leave a major ecological footprint," they say. 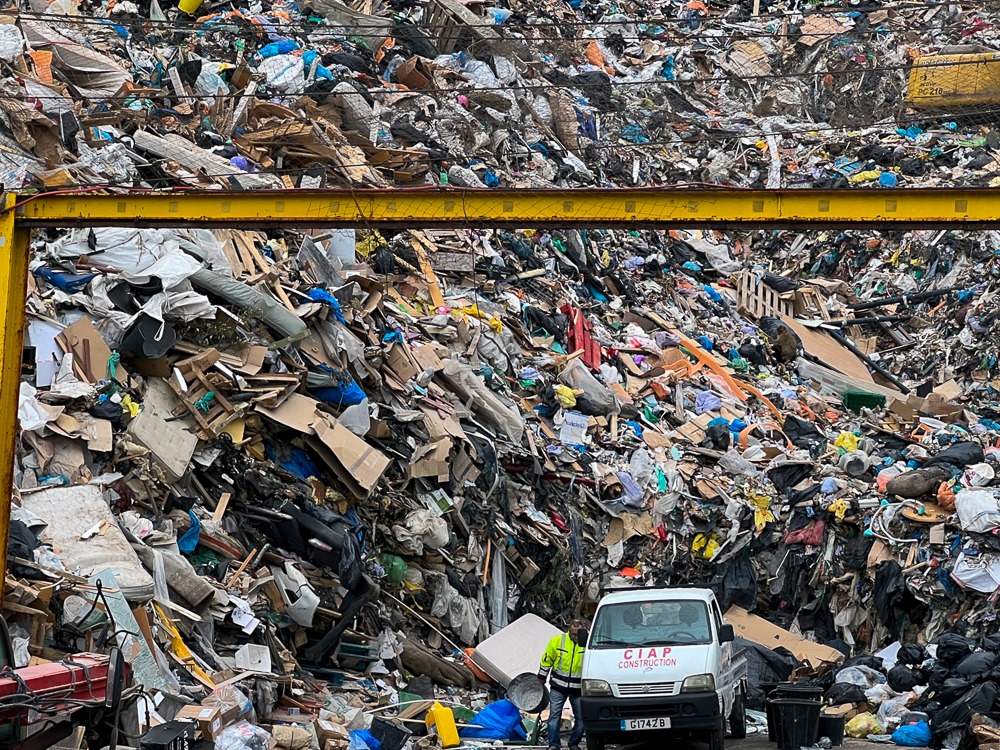 The Gibraltar Government has begun shredding and compacting rubbish amid continued delays obtaining permits to export it to Spanish recycling centres. Up to 6,000 tons of municipal waste and bulky items have built up in recent weeks due to delays...

The Gibraltar Government has begun shredding and compacting rubbish amid continued delays obtaining permits to export it to Spanish recycling centres.

Up to 6,000 tons of municipal waste and bulky items have built up in recent weeks due to delays with the paperwork, which arise as a result of Gibraltar’s departure from the EU.

Officials here expect the issue to be resolved shortly but have in any case commenced shredding the waste in the meantime, allowing for storage in tunnels until it can be exported.

This is the first time that machinery to shred the waste, compact it and package it into bales has been used since it was purchased under a 2019 agreement with the UK Government, which funded the £862,000 kit as part of contingency plans for a no deal Brexit.

“The shredding of rubbish has now commenced and the paperwork for its exportation is still awaited and is expected shortly,” a spokesperson for the Department of Environment said.

“A number of tunnels and vaults inside the Rock have been identified for storage purposes in the meantime while the situation is resolved.”

After Brexit and the end of the transition period, Gibraltar moved to an alternative legal framework provided under international conventions.

“This framework is different and involves processes and procedures which take more time,” the spokesperson told the Chronicle.

“The export of rubbish is currently awaiting the finalisation and renewal of paperwork and approvals which has suffered some delays.”

Gibraltar’s rubbish is exported to a recycling plant in the Campo de Gibraltar under a contract worth over 1.2m euros annually with Arcgisa, the public entity that handles the Campo’s municipal waste.

Arcgisa handles over 30,000 tons of waste from Gibraltar every year.

In the past, clearance under the EU framework was granted by the Junta de Andalucia and was a relatively simple process that was tried and tested.

The Chronicle understands the delays with the new paperwork arose because while the waste is treated initially in the Campo site, it is then broken up and sent to other recycling centres in different parts of Spain.

Under the new authorisation framework outside the EU, regional authorities in each of those sites must submit paperwork in order for the exports to be cleared by central authorities in Madrid, making the process more cumbersome and bureaucratic.

Visual of the Rubbish 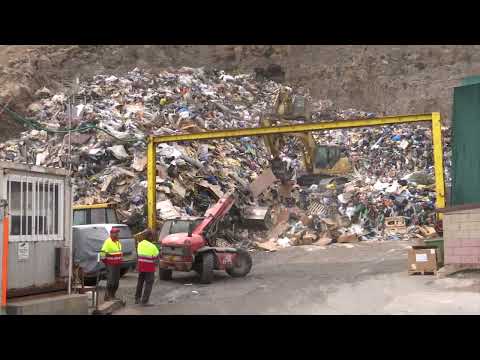 This could act as a wake-up call to Gibraltarians.

It could lead to something good – where Gibraltarians and Gibraltar start taking care of their own mess.

Assess the amount of trash they produce; and develop steps to be done about it – without relying on dumping their own-trash on the Campo or other countries.

China decided a few years ago to stop being the dumping ground of The West. The recyclables were contaminated with hazardeous materials. The West found other countries to take the trash, but is that right? Everyone talks a good "green game" but they aren't walking the walk.

China No Longer Wants Your Trash. Here's Why That's Potentially Disastrous.. Mere weeks after the ban took effect, waste management facilities in several countries, including the U.S., Canada, the U.K. and Germany are groaning under the weight of trash that no one seems to know what to do with.

Recycling in Gibraltar has been available for quite some time, but so many people still bin what can be recycled – http://www.thinkinggreen.gov.gi/waste/recycling.
Gibraltar's Ecopark – Thinking Green - Local Waste Centres

There are cardboard boxes and other recyclables in the video. Perhaps, since these are also sent to Spain, there may be similar issues in their disposal. Is the government just compacting all items (even recyclables) together? What about all the talk about green and sustainable Gibraltar? Where does that come into play – or is that really about something else?

Instead of the government selling real-estate to foreign investors, maybe they should assess how to deal with their own trash by allotting space to manage it.

Even food scraps can be turned into biodiesel – and that's actually green. Whereas, the forests around the world they are decimating to make biodisel is not really green.

Each individual must do their part, avoid being lazy and putting in the bin what can be recycled. The government should not have to make individuals do the right thing. Likewise, the government needs to provide a way to manage it, where everyone and The Rock benefits. Lorries carrying waste for export have been able to leave Gibraltar today for the first time since the start of the year, with the necessary documentation now in place.

In response to GBC questions, the Government confirmed that the administrative process is now complete, with the trans-frontier shipment certification signed.

Lorries belonging to private contractor Monteverde departed the Rock today; GBC understands more than six thousand tonnes of household waste are to be removed, with 16 trucks to make multiple trips to the Complejo Medioambiental Surde Europa in Los Barrios over coming days.

The delay has been attributed to extra paperwork following Brexit, with waste having accumulated at the tip on Europa Advance Road as a result.

Spain will allow 6,000 tons of rubbish from Gibraltar to be disposed of in Cadiz 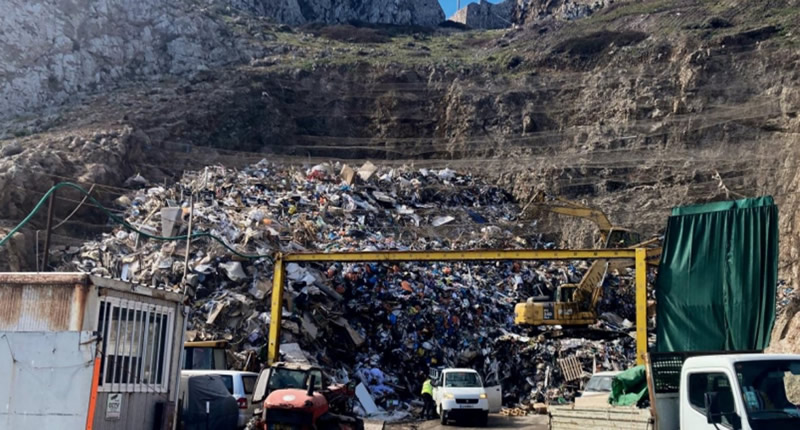 Spain will allow 6,000 tons of rubbish from Gibraltar to be disposed of in Cadiz

6,000 tons of rubbish from Gibraltar is to be disposed of in a landfill in Cadiz

Rubbish will be transferred from Gibraltar to a landfill in the Cadiz municipality of Los Barrios.

El Peñon has sent 30,000 tons of rubbish to the Los Barrios landfill every year for decades, but since the beginning of 2022 it has piled up 6,000 tons of waste on its east face, and tunnels, due to the impossibility of it crossing the border.

This circumstance has created the risk of the rubbish ending up in the sea... and may cause “an episode of environmental pollution for the entire bay”.