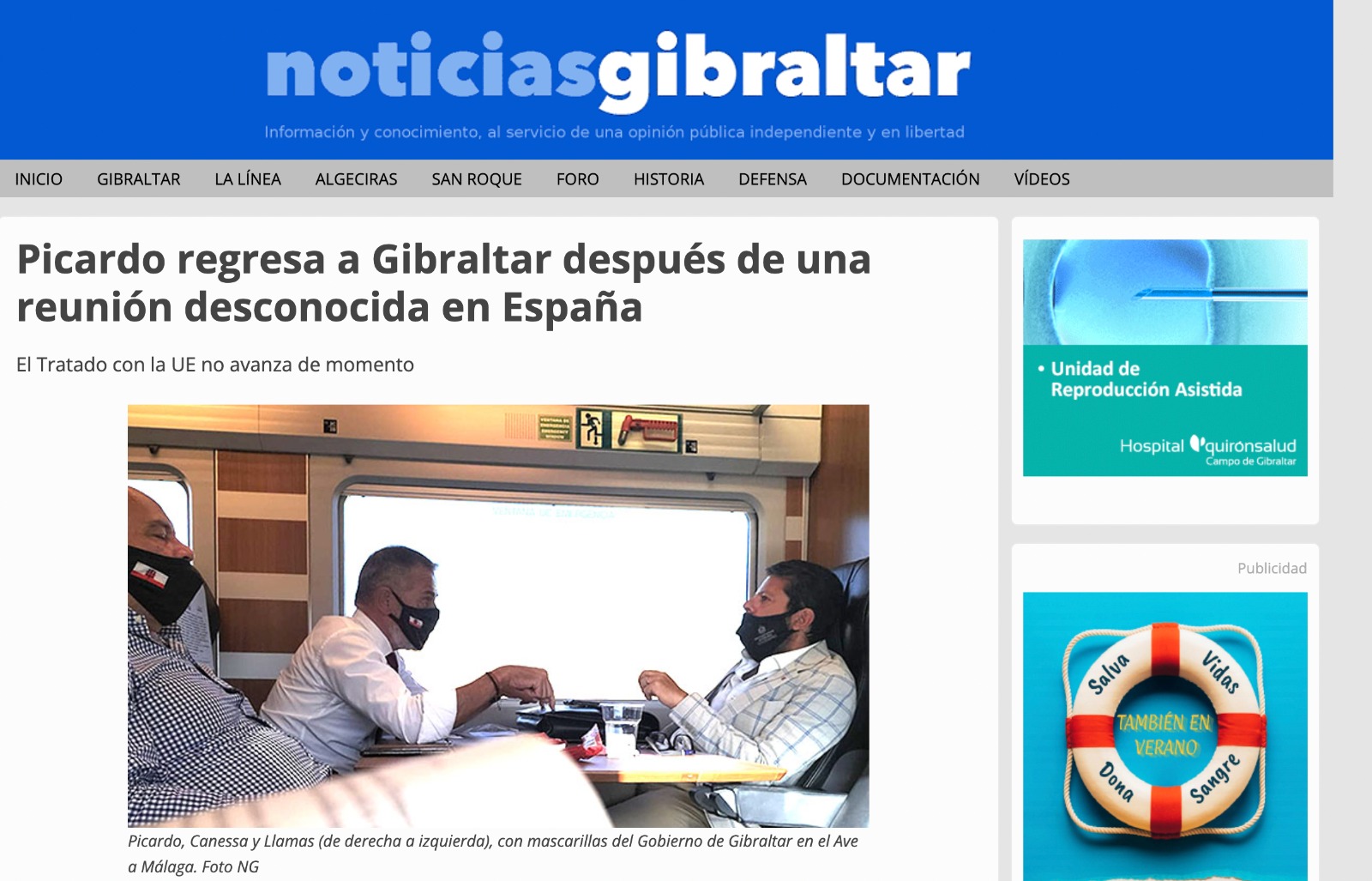 The Gibraltar Government said on Saturday that its Brexit negotiating team had attended meetings in Cordoba on Friday. Confirmation of the meeting came after a Spanish website published photo of the Gibraltar delegation on a train returning from... 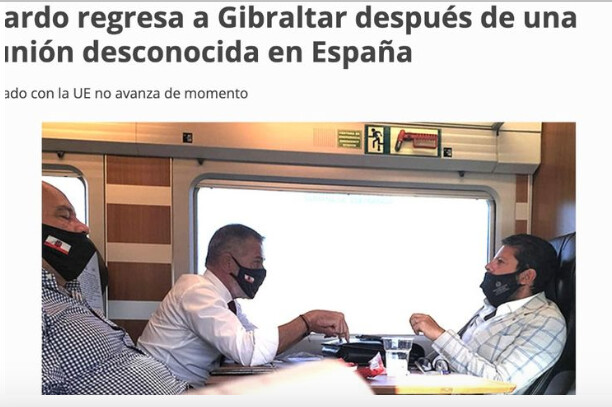 The Gibraltar Government said on Saturday that its Brexit negotiating team had attended meetings in Cordoba on Friday.

Confirmation of the meeting came after a Spanish website published photo of the Gibraltar delegation on a train returning from the meeting.

The website, Noticias Gibraltar, said the meeting was “unknown”.

It was taken by an unknown passenger who had been sitting opposite reading a book on the Battle of Trafalgar, according to Mr Picardo.

The passenger appears to have passed the image to the Spanish website.

No.6 Convent Place said the Government had repeatedly stated publicly that discussions on the negotiation would continue between formal rounds of talks.

In July, it said those discussions would be “ongoing and take place at different levels”.

On Saturday, it dismissed any suggestion that the meeting had been “secret or undisclosed”.

It said given such meetings were “innumerable”, the Gibraltar Government only made announcements when they were formal negotiating rounds or when they involved ministerial representation from other governments.

The government did not say who had attended the meetings in Cordoba on Friday. The Spanish Government and UK Government have not made any public statement on the meeting either.

“We have stated repeatedly that we are constantly meeting with colleagues from the UK, the EU and Spain as we continue to try to finalise negotiations for a safe and secure treaty between the UK and the EU which settles our future relationship with the EU and which has no implications for sovereignty,” Chief Minister Fabian Picardo said.

“I am very proud to be leading the Gibraltar negotiations, alongside Joseph Garcia.”

“The work is constant and unrelenting and occurs daily by telephone, email, WhatsApp, video conferences and in person meetings.”

“It has not abated through the summer months as we try to finalise matters as soon as possible.”

“Work on the proposed treaty therefore continues, with more formal rounds to be announced shortly starting in September, and as soon as we are able to announce areas of progress or agreement, we will do so.”

“It has continued today, Saturday and will continue tomorrow, Sunday.”

“Yesterday we met in Cordoba with officials to review progress and the work that remains to be done.”

“We were surreptitiously photographed by a fellow passenger on the train, who was ironically reading a book about the battle of Trafalgar and was clearly not friend of Gibraltar who has passed a copy of the photograph to a Spanish website.”

*Picardo’s self-conscious and defensive reaction to Cordoba meeting revelation
*Not a routine meeting possibly
*Discussions were/are with EU not Spain
*Voters deserve more openness and transparency where talks with Spain are involved
*High level talks involving the Chief Minister, Deputy Chief Minister and Attorney General
*Talks with EU, why just Spain now?
*Voters wait for public announcement, in the meantime blind faith is called for
*Revelation by a fellow passenger
*Oddly labelled anti-Gibraltar because reading about the British victory at Trafalgar

The Chief Minister has self-consciously and defensively reacted to the revelation that an unannounced (to avoid the use of the word ‘secret’) meeting took place between him, the Deputy Chief Minister and Attorney General and Spanish government and Spanish Foreign Ministry officials in Cordoba last week.

The disclosure in Spanish online news media ‘Noticias Gibraltar’ is not lacking in being newsworthy, despite the weak attempt in the GSLP-Liberal Government press release to make it sound as lacking in importance by classifying it to be part of the routine of the current process of Gibexit talks.

The huge influence (not to call it power) exerted by Spain on Gibexit is shown clearly by those Córdoba talks having taken place.

Paint it as he likes it is not the same as the routine ongoing exchanges that GSLP-Liberal Chief Minister says have been ongoing. It is a meeting involving the highest level of participation from Gibraltar’s elected and unelected representatives.

To quote his Facebook post “As we already said in our press release of 15th July 2022, discussions continue at all levels. Meetings, telephone calls, virtual calls, letters, emails, WhatsApp and WhatsApp voice and video calls have been happening every day.”

DISCUSSIONS WITH EU, NOT SPAIN

The discussions are with the EU with Gibraltar participating as part of the UK delegation.

The discussions, until what has been revealed now, were not directly between high level Gibraltar ministers and the Attorney General and Spanish government and Spanish Foreign Ministry officials in a Spanish City.

Why that development or if it is not a development why has that come to light in the manner that it has now? Surely voters deserve more openness and transparency on the make-up and procedure of the talks, albeit that we all must swallow that no detail can be made public. To date not even the agenda is publicly known.

NOT OPEN AND TRANSPARENT

It is inaccurate to say that “There is … nothing remotely secret or undisclosed about such meetings having taken place and continuing to take place.”

It is not open and transparent that “the Government only makes announcements of such meetings when they are formal negotiating rounds or when they involve senior Ministerial representation from other Governments Involved.” If high-level meetings are to be held with Spain those should have been announced.

The involvement of our Chief Minister, Deputy Chief Minister and Attorney General makes those meetings high-level, irrespective of who attends them for Spain. The mere fact that it is a meeting in Spain with the Spanish government officials makes it of huge interest and newsworthy, as proven by the extensive reaction to the revelation.

Surely the involvement of our highest elected representatives, none less than our Chief Minister, and the Deputy Chief Minister, accompanied by the Attorney General at a meeting in Spain exclusively with Spanish officials (and no one from the EU delegation to formal negotiations), which he admits in the press release is not a “formal negotiating round” is even more deserving of a public announcement to Gibraltar’s electors.

If it is not a “formal negotiating round” what is it? Is it an attempt to come to terms with Spain to get progress in the talks between the U.K. and the EU? If so it emphasises Spain’s control.

It is a public announcement that was not forthcoming. It is a meeting just before the long weekend that would have gone by unseen by Gibraltar’s voters.

The meeting must have involved some serious discussion which could not be dealt with in “telephone calls, virtual calls, letters, emails, WhatsApp and WhatsApp voice and video calls”. Yet the Chief Minister tells us that he, the Deputy Chief Minister and Attorney General “met in Cordoba with officials to review progress and the work that remains to be done.”

If there was anything that could be dealt with on “telephone calls, virtual calls, letters, emails, WhatsApp and WhatsApp voice and video calls”, surely it is no less than that, most of which would already be recorded in minutes or notes. That indicates the discussions engaged more serious matters than a procedural review. What they are remains secret.

TALKS BY UK WITH EU, SO WHY NOW JUST SPAIN?

The Chief Minister has throughout emphasised that any treaty over Gibraltar will be “between the UK and the EU to settle our future relationship with the EU and which has no implications for sovereignty.”

Yet now unannounced high-level talks engaging none less than the Chief Minister, Deputy Chief Minister, and Attorney General take place with the Spanish Government in Cordoba.

MATTERS TO BE FINALISED AND ANNOUNCED?

It is pleasing to be told that, “we try to finalise matters as soon as possible” and that “as soon as we are able to announce areas of progress or agreement, we will do so”.

Talk is of finalising, which indicates progress is well advanced towards a final agreement. Yet we must wait for any areas of progress to be announced, again a clear indication that a positive outcome to the talks is still expected by the Chief Minister.

This blogger supports the concept of a Gibexit ‘deal’, but any final take must rest on the reality of what is announced. Right now, only those negotiating know what that is. Blind faith is for the religious.

In politics, especially international relations engaging those who have a claim on our sovereignty, there can be no blind faith. Mr. Picardo you have put yourself in a place where the responsibility on your shoulders is huge. You do not justify your decision to your electors. You simply plough on. You must get it right, therefore.

Then the extraordinary, and very self-conscious and defensive, statement from the Chief Minister, “We were surreptitiously photographed by a fellow passenger on the train, who was ironically reading a book about the battle of Trafalgar and was clearly not a friend of Gibraltar who has passed a copy of the photograph to a Spanish website.”

What may be ironic is that the meeting took place in Córdoba, the birthplace of the Córdoba Agreement.