Gibraltar prepares its citizens for brexit no deal as negotiations continue 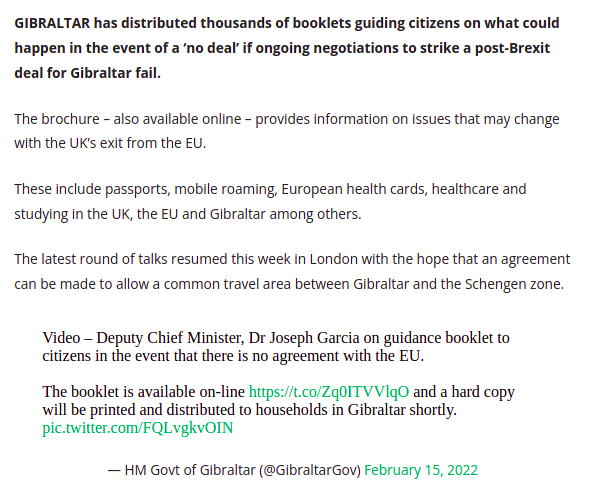 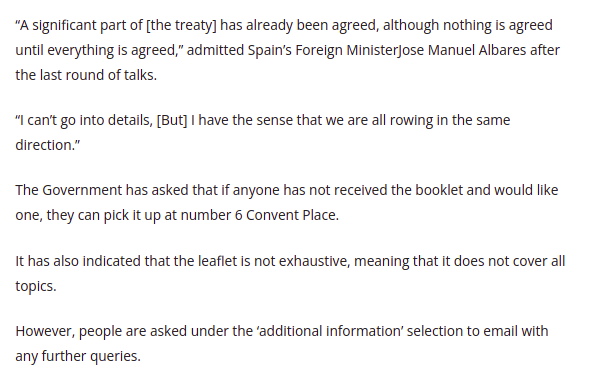 GIBEXIT TALKS BUT ONLY SILENCE

The sixth round of EU-UK Gibexit talks have ended, with two rumours at each end of the spectrum. On the one hand we have the belief of some that a ‘deal’ is done; at the other end those who say a ‘…

The sixth round of EU-UK Gibexit talks have ended, with two rumours at each end of the spectrum. On the one hand we have the belief of some that a ‘deal’ is done; at the other end those who say a ‘deal’ is hugely distant. But reality is that silence is what reigns.

The truth is that we need to wait and see, in the uncertainty that causes worry.

The rumour that a ‘deal’ is done provides no detail, simply that it is all done and dusted, and it will be announced in a matter of weeks. It is a belief which is supported by various statements and theories.

The greatest support for this contention comes from the recent declaration of the Spanish Foreign Minister, Jose Manuel, Albares, who said, in mid-February, that a ‘deal’ was “almost 99% ready”. He safeguarded his position by saying that, inevitably, the final 1% of any treaty negotiation invariably proved the most difficult.

The other theory doing the rounds is that the news about the potential bad effects of ‘no deal’, are being widely aired in Gibraltar by the Government, which many think is intended to create a foundation to ‘sell’ any ‘deal’ that is announced, by establishing how all those bad outcomes, if there were to be ‘no deal’, will be avoided.

The other camp is firm that talks are going badly with many an issue still far from agreement.

The main one is how to overcome all computations necessary to allow for a free flow of persons across the border. It is an issue that carries with it, it is said, the difficulty of how to deal with military personal who access Gibraltar.

Another is combining agreements over Gibraltar without complicating concerns that affect the Irish border with Northern Ireland. There are negotiators who are dealing with both matters. They are, consequently, very conscious not to confound one with the other.

What is clear is that self-imposed timetables to conclude negotiations have not been met in the past, and are unlikely to be met once again. The talk was that negotiations would be finalised by the end of March. We are three weeks away from that date with no news.

The reality is that it is a deadline that is likely not going to be met, unless the theory, about the propaganda campaign to make a ‘deal’ look good by highlighting the disaster that ‘no deal’ would bring about, is right, and an announcement is made shortly, just prior to the Easter break.

There is no talk, currently, of extending the period for negotiating a Gibexit treaty. If EU negotiators end the present rounds, believing there is no way forward open, then the likelihood of a further extension diminishes. That in turn must be balanced with two considerations.

One is that the sad and painful events between Russia and the Ukraine have come about. Undoubtedly that must be taking up the time of senior politicians and public servants of both the EU and the UK. Accordingly, talks on Gibexit may not have advanced as far as hoped, so an extension is called for.

The other is that ‘no deal’ will have huge adverse effects on the Campo de Gibraltar and its inhabitants, who have a massive economic dependence on a free-flowing frontier. The necessity of a ‘deal’ for them cannot be ignored by Spain, and in turn by the EU.

An extension to the time for negotiating a treaty must be on the cards, unless there is a view formed that ‘no deal’ can be the only outcome. It is difficult to believe that such a final view will be formed at this stage.

If indeed ‘no deal’ is the expected outcome, then that should be said, or an announcement made to the effect that, were that to be the outcome, a transitional period of several months would be put in place.

A transitional period is necessary to allow arrangements to be organised, to lessen and alleviate the effects on all, including Spanish cross-frontier workers, of a ‘no deal’.

In the meantime, we, in the immediacy of both sides of the frontier, all live a life of the uncertainty caused by not knowing.