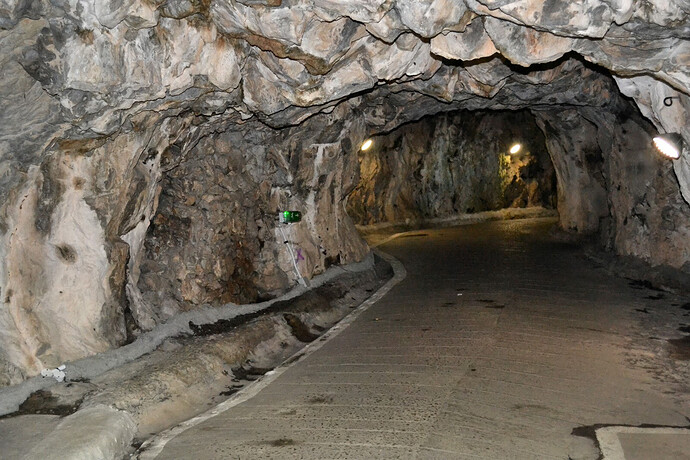 Dispatch: Gibraltar clears out secret wartime tunnels bored into the Rock to...

The Rock of Gibraltar towers over the border with Spain, where a steady stream of up to 15,000 workers pass back and forth almost seamlessly over the frontier every day.

The 1,398ft high landmark, home to the famous Barbary Apes, is also a key part of the Gibraltarian government’s emergency Brexit plans.

The mountain is honeycombed with 33 miles of tunnels and chambers, some dating back to great sieges of the past, and more than Gibraltar's land mass of two and a quarter square miles.

During the Second World War, a subterranean secret fortress, impervious to heavy bombardment, was carved out and General Eisenhower planned Operation Torch, the invasion of North Africa, under the Rock.

Gibraltarian officials have cleared out some tunnels and vaults to stockpile vital supplies or blocked exports to Spain just in case a deal isn’t reached.

“This should increase our storage capacity from something like two days to two months,” Dr Joseph Garcia, the deputy chief minister of Gibraltar, told the Telegraph and said some caverns were “the size of cathedrals”.

Brexit is still not done in Gibraltar, where 95.9 per cent of people voted to Remain in 2016, after last year’s deal deadline was missed. In the dying hours of last year, transition arrangements to buy time for more talks were agreed.

However, the border crossing with Spain could soon be consigned to history if UK and EU negotiators, who meet next week, strike a post-Brexit deal to create freedom of movement with Spain.

It would make the crossing, a vital part of the economy in Gibraltar and neighbouring Andalucia, invisible.

Now, in a mitigated no deal, Spanish border guards turn a blind eye to EU rules by not stamping Gibraltarians passports when they cross, if they can show a resident’s card.

If the documents were stamped, they would be subject to a 90 day limit in visa-free travel agreed in the Brexit negotiations with the UK.

Spanish citizens pass through automatic e-border gates at the border. If a deal is reached frontier checks will be moved to Gibraltar’s nearby airport, a short walk away, and its port.

That would free Gibraltarians and Spaniards to cross into each other’s territory with no checks in a common travel area.

Fears that Brexit would spell disaster for Gibraltar were soothed when it became clear there would be minimal impact on the UK-focused financial services and online gaming industries, which are the pillars of the local economy with the port and tourism.

But the territory is entirely dependent on its Spanish workforce to staff its offices, bars and service industry.

“We are short of manpower,” said Christian Hernandez, the president of the Gibraltarian Chamber of Commerce.

“If we get to a position where these workers are not able to come to work every day because they are going to face a three hour queue then that is going to have quite a damaging effect for our economy.”

Gibraltar imported almost £381M of goods and services from Spain in 2013. Spanish Frontier workers earned more than £102M in 2013 and over £65M of this money was spent in the neighbouring Andalucía regions of economic activity.

Covid hit Gibraltar and its economy hard but the Iberian peninsula did benefit from the UK’s early lead in the vaccination race. Many frontier workers got their jabs on the Rock.

Over the border in Spain, Juan Franco, the mayor of Línea de la Concepción sees Gibraltar as a way to transform his crime-ridden town of 70,000 people into a prosperous and semi-independent municipality.

With more than 30 per cent unemployment and the biggest base in southern Spain for hashish smuggling across the Strait of Gibraltar, La Línea’s formal economy is dependent on its 10,000 frontier workers.

“If you remove the border, fear will disappear and investment will flow in as never before. Gibraltarians have been hesitant because they have seen how Spain can close the frontier, and people on both sides lost everything,” Mr Franco told The Telegraph – from his office looking over towards the Rock.

Tired of what he calls years of suspicion and under-funding of La Línea, Mr Franco wants a referendum on turning the town into an autonomous community with its own tax regime. He has so far been denied permission by Spain's government.

“There is nothing for us on the Spanish side of the border, and it would be a disaster for Gibraltar if people like me could not cross each day,” said Antonio Sánchez, a 55-year-old social worker from La Línea, who has worked with children and the disabled in the British territory for more than five years.

“In La Línea the only thing I might find is a job as a janitor or selling lottery tickets, if I’m lucky,” said Rosendo Oliva, a plumber who was recently made redundant.

The government was forced to arrange a daily ferry to keep the local Morrison’s supermarket stocked with British goods such as sausages and bacon after Brexit.

In 2002, 99 per cent of Gibraltarians voted to remain under UK sovereignty, which dates back to 1713, in a referendum.

Non-EU imports such as goods carried by British lorries travelling from Dover must now be checked in and out of the bloc.

That was impossible at the frontier so a daily ferry is put on from Algeciras, the nearest port with the infrastructure to check the goods back out of the EU.

“It’s been a hugely cumbersome, bureaucratic and time consuming procedure for us in a small administration,” Dr Garcia admitted.

Relations with Gibraltar have warmed in a way unthinkable when Madrid was branding it a tax haven and a colony.

But Gibraltar has its red lines, including that the EU border guards are from the bloc’s Frontex agency and not Spain.

“The future of Gibraltar is British, British, British and nobody should make any mistake about that,” said Fabian Picardo, Gibraltar’s First Minister, this week, as he ruled out any “Spanish boots” on the ground.

Meanwhile, under the mass of its most famous landmark, Gibraltarians are preparing for the worst while hoping for the best.

Read article at link on MSN.

The whole of Gibraltar identifies with being British, as practically everyone voted to remain a part of Britain over Spain and National Day is very important to Gib.

Now, if your question is layered to include that Brit - ish means "man of the convenant" as explained here – "The word British is Hebrew. It means "the People of the Covenant " or in other words "the People Israel", whose written Constitution; under that Covenant, that they have rejected to their own loss; is written in the Bible (Israel's Book) that they still swear on to tell the Truth, but whose Constitution, under which there are no poor people, is then foolishly rejected by almost everyone, in favour of inferior and unjust, man-made laws and economics whichcause poverty and therefore also crime brought about by deprivation and desperation."

Then, I'd say Picardo is definitely not British, as he cares not about keeping God's Covenant.

"My parents instilled in me the simple principle of equality, that nobody is better than anybody else and that we shouldn’t look down on absolutely anyone because all of us are created equal."

Thank-you for being here and sharing your humble convictions.

In addition one might ask, who is his father?

John 8:33 Jesus said unto them, IF God WERE your Father, ye would love me: for I proceeded forth and came from God; neither came I of myself, but He sent me.
8:34 Why do ye not understand my speech? [even] because ye cannot hear my Word.
8:35 Ye are of [YOUR] father the devil, and the lusts of your father ye will do. He was a murderer from the beginning, and abode not in the Truth, because there is no Truth in him. When he speaketh a lie, he speaketh of his own: for he is a liar, and the father (inventor) of it.
8:36 And because I tell [you] the Truth, ye believe me not.
8:37 Which of you convicteth me of sin? And if I say the Truth, why do ye not believe me?
8:38 He that is of God heareth God's Words: ye therefore hear [them] not, because ye are not of God. King of kings' Bible - John 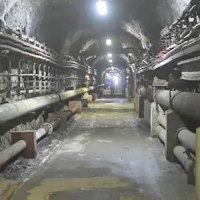 World war tunnels would be used to stockpile vital supplies should Brexit...

Since he took on the task of ensuring Gibraltar's survival should the Brexit talks collapse and Gibraltar ended with a hard border, the deputy chief minister Dr Joseph Garcia has been busy working out contingency plans.

And it has now emerged that such plans include clearing out world war tunnels to stockpile vital supplies, should the case arise.
In an interview with the Telegraph, he said: “This should increase our storage capacity from something like two days to two months.”
The Rock is a key part of the Gibraltar government’s emergency Brexit plans.
The mountain is honeycombed with 33 miles of tunnels and chambers, some dating back to great sieges of the past, and more than Gibraltar's land mass.
Gibraltarian officials have cleared out some tunnels and vaults to stockpile vital supplies or blocked exports to Spain just in case a deal isn’t reached.
Newspapers galore carried references of the plan to utilise the secret tunnels.