CM tells UN Gibraltar will always fight for self-determination, even while seeking ‘mature and pragmatic’ relations with Spain 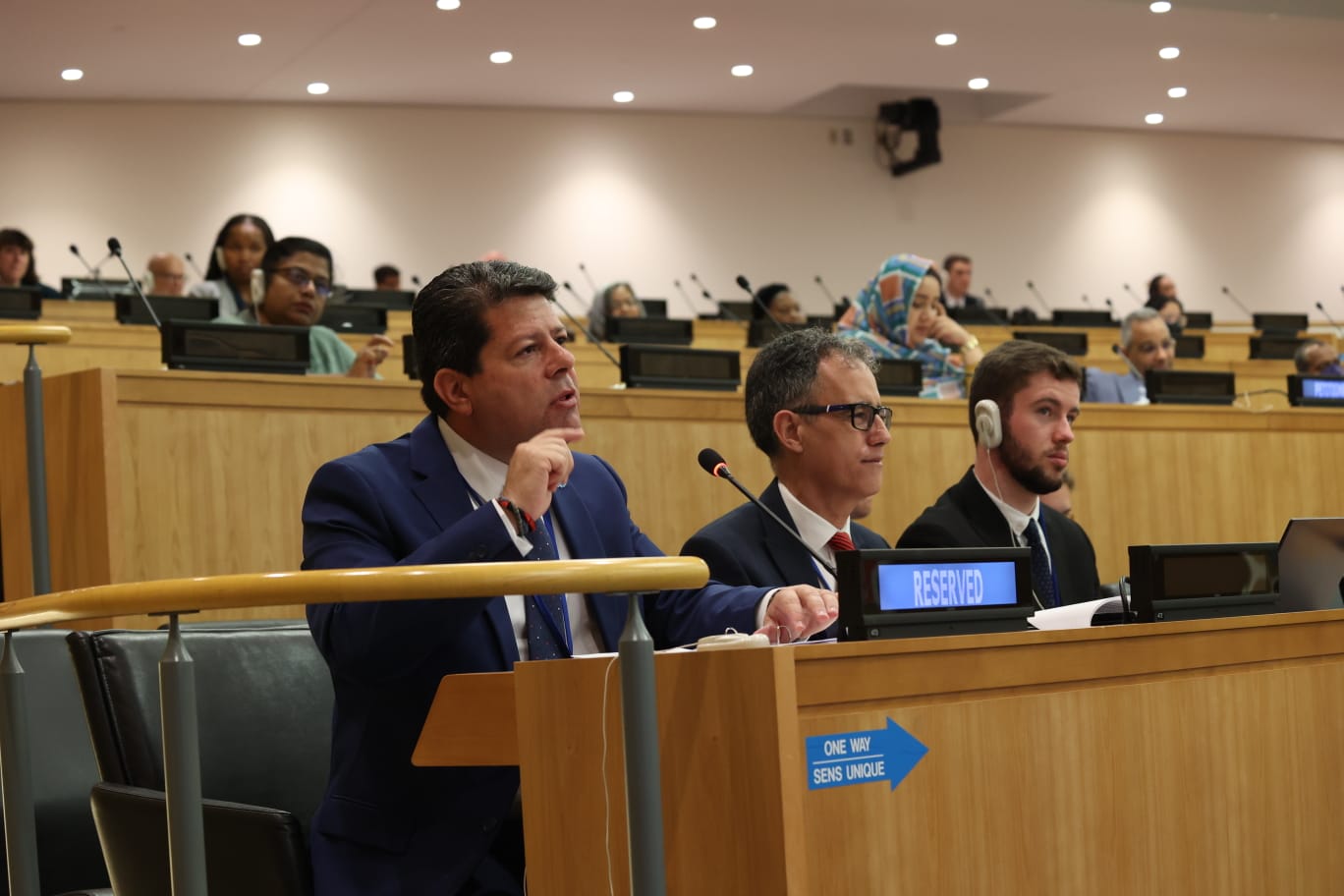 CM tells UN Gibraltar will always fight for self-determination, even while...

Chief Minister Fabian Picardo told the UN’s decolonisation committee [C24] that Gibraltarians would always “fight our corner and defend our homeland”, even while stressing a desire for pragmatic diplomacy with Spain “despite our differences o...

13th June 2022
Chief Minister Fabian Picardo told the UN’s decolonisation committee [C24] that Gibraltarians would always “fight our corner and defend our homeland”, even while stressing a desire for pragmatic diplomacy with Spain “despite our differences on key, fundamental issues”.

Addressing the Committee of 24 in New York on Monday, Mr Picardo left no doubt that only the Gibraltarians could decide the future of the Rock, a message that the C24 has been hearing from Gibraltar for nearly six decades.

He urged the committee to engage fully with Gibraltar to better understand the views of its people, reminding diplomats that they had yet to despatch a mission to the Rock to see for themselves the situation on the ground.

But he said too that while Gibraltar would continue to defend “what is exclusively ours”, there was room for optimism “about solutions coming down the track”.

He welcomed Spanish goodwill in the negotiations for the Rock’s post-Brexit relations with the European Union and sketched out the progress so far, including on thorny issues such as tax and tobacco.

“The Gibraltarians will continue to come here, to fight our corner and defend our homeland for as many years as are necessary,” Mr Picardo said, reflecting on the fact that it was 59 years since Sir Joshua Hassan had first addressed the UN on behalf of the people of Gibraltar.

“For whilst there is a claim to our land, and whilst there is an attempt to stifle our voices and deny us our inalienable human right to determine the future of our land for ourselves, we will be here, fighting and stopping any such attempts.”

This was the first time in two years that Mr Picardo and his delegation, which included Deputy Chief Minister Dr Joseph Garcia, had been able to address the C24 in person as a result of the Covid-19 pandemic.

As the C24 chairwoman, Keisha Aniya McGuire from Grenada, urged delegates to wear masks if they saw fit – some did but not all – the committee heard brief general submissions from various delegations before tackling the Gibraltar issue.

Mr Picardo’s address was measured, perhaps reflecting the delicate stage of negotiations for a UK/EU treaty on Gibraltar, which are due to resume in the coming days.

But there was no mistaking the core message either.

The Chief Minister said the Gibraltarians were “the most committed, the most indefatigable and the most unbeatable” of the parties in respect of Gibraltar.

He singled out Sir Joe Bossano for praise, describing him as “a remarkable man, leader and Gibraltarian” who at age 83 continued to fight for the Gibraltarians’ right to self-determination.

“There is only one Joe Bossano, but make no mistake about it,” the Chief Minister told the committee.

“There are 32,000 more Gibraltarians with the same grit, the same determination and the same commitment that he has to defend our homeland.”

“So we are not going to go away until you delist us.”

“We are going to keep fighting to ensure that you delist us.”

“We are going to keep showing you why there can be no valid argument in international law not to delist us.”

“But in expressing to you the passion that we feel for the defence of our homeland, and our insistence in asserting our right to self-determination, we are not seeking to exclude cooperation with our neighbours, despite our differences on key, fundamental issues.”

He said too that Gibraltar understood the need to work with neighbouring governments “in a spirit of maturity and diplomatic and economic cooperation”.

“Going forward, we will work in amity and cooperation with our neighbours, to the north and south,” he told the UN committee.

“We will work to facilitate the lives and trade of those who need or wish to cross our borders as fluidly and securely as possible.”

“But we will do that whilst continuing to defend what is exclusively ours.”

Gibraltar, he said, was committed to always seeking pragmatic solutions to issues that did not compromise its fundamental positions.

That was the driver behind close work between Gibraltar, the UK, Spain and the European Union to agree a treaty for a “safe and secure” framework for the Rock’s future relations with the bloc.

It underpinned too the Memorandums of Understanding that “can exist in parallel” to the treaty to address issues that have “marred the relationship” between Gibraltar and Spain in the past.

He cited by way of example the Tax Treaty, which addressed mechanisms for direct cooperation between tax authorities in Gibraltar and Spain created by the Rock’s “reluctant departure” from the EU.

He referred too to “tobacco matters” and Gibraltar’s unilateral commitment to maintain a fixed differential with Spanish prices, and which he said would be maintained going forward if there was a UK/EU agreement on a treaty for Gibraltar.

Mr Picardo said these developments underscored Gibraltar’s goodwill, adding that Spain had also reciprocated in its approach after Brexit.

“There are reasons to be optimistic about solutions coming down the track,” he told the UN committee.

“What we will never accept, however, is the notion that we, the Gibraltarians, are mere bystanders in the decolonisation of Gibraltar.”

“Or the notion that we are not a genuine ‘people’ in our own right with the inalienable right of self-determination.”

That notion, the Chief Minister said, had been sowed at the UN by “pre-democratic” Spain, which argued that the “real inhabitants” of Gibraltar were expelled from the Rock when it was captured in 1704

He attached to copies of his written speech distributed at the meeting the text of an article by Dr Jamie Trinidad, a Gibraltarian Cambridge University Fellow of International Law, which he said debunked “every aspect of that false notion”.

In the piece in question, Dr Trinidad concluded after forensic analysis that the traditional Spanish argument that the Gibraltarians are an illegitimate population with no roots in the territory was difficult to sustain today.

“Do not allow anyone to build any further castles in the air based on that nonsense,” Mr Picardo said in New York.

“That is why we will never accept that the United Nations should determine, year after year, that the international legal status of our land should be the subject, not of our decision, but of dialogue between the administering power and a third party.”

Mr Picardo recalled Sir Joe’s address to the UN seminar on decolonisation earlier this year in St Lucia, where he underscored that the central issue facing the UN on the future of non-self-governing territories was “people”.

He told the committee it had the power and jurisdiction to do only one thing.

“To protect our rights as a people, and our rights only,” the Chief Minister said.

“That is the binding principle of international law here.”

The right of the people of all non-self-governing territories to self-determination.”

“That is the inalienable human right in play here.”

“You have no power to accept or promote a solution which relates to the transfer of our land above our heads.”

“That would be to breach binding international law.”

He reminded the UN that Spain’s former State Secretary for Europe, Luis Marco Aguiriano Nalda, had accepted that by acknowledging that if Spain ever raised the issue of sovereignty, the UK and Gibraltar would “close our files and leave”.

For the UN to push that agenda yearly by insisting on bilateral dialogue between London and Madrid was “unhelpful and counterproductive”.

“Those wise words by Sr Aguiriano show that Spain knows that there is no question of a dialogue over our heads ever starting, let alone succeeding,” he told the C24.

“In fact, your only mandate…is the very opposite of that.”

“It is to work every day to defend the freedom of choice of the people of the non-self-governing territories.”

“To work every day to defend the freedom of the Gibraltarians to choose our political future for ourselves.”

And he added: “Your committee needs to engage with Gibraltar.”

“You need to do more to delist us, and soon.”

“Because Gibraltar is our land, it is our home.”

“And only our choices will determine its future.”