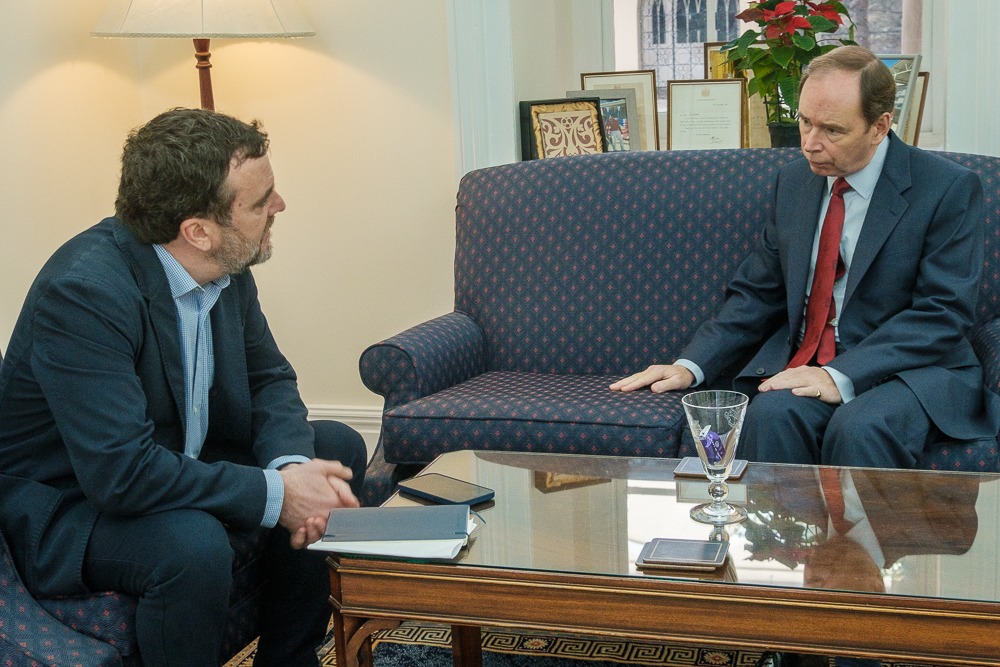 Brexit has opened the door for the UK and Spain to deepen their cooperation on defence and security issues – and potentially resolve longstanding “irritants” for the UK relating to Gibraltar. Both governments have met on several occasions to...

Brexit has opened the door for the UK and Spain to deepen their cooperation on defence and security issues – and potentially resolve longstanding “irritants” for the UK relating to Gibraltar.

Both governments have met on several occasions to explore closer ties between their respective armed forces under the umbrella of NATO, a dialogue that is happening in parallel to negotiations for a UK-EU treaty on Gibraltar’s post-Brexit relations with the bloc.

While the two are not directly linked, the work done jointly by all three governments in pursuit of a treaty presented opportunities in other areas, including defence.

“I think there's an opportunity there, probably through the umbrella of NATO,” said Vice Admiral Sir David Steel, the Governor.

"Spain will continue not to like Britain and Gibraltar having defence assets in the way that we do, [and] that is forming part of our discussions with Spain outside the treaty negotiations.”

"And the difficulties over creating a treaty for Gibraltar have actually opened the door, I think for both countries, to discussions about a much closer association between Spain and the United Kingdom."

"And that's not just economic, it’s also in defence terms."

The UK has several “irritants” relating to Spain’s stance on the use of the military infrastructure on the Rock, including Madrid’s ban on overflight for military planes heading to and from Gibraltar, and persistent unlawful incursions into British waters.

The UK wants to find a way to resolve those irritants and defuse any tension around the use of Gibraltar as a military base, starting from the premise that both countries share common interests and allies within NATO.

As with everything related to Gibraltar, however, the issue of sovereignty is a restraining factor.

"They contest sovereignty, we contest their argument."

"A lot of that is to do with defence assets in Gibraltar."

"They clearly have ambitions to have greater control over those defence assets in Gibraltar."

"But to use a rather hackneyed line now, that is our red line."

"Now, as a military man, I would love to see more NATO assets using Gibraltar, including Spanish assets."

"This is the most strategic port of call in the western Mediterranean.”

“How wonderful it would be to once again see a NATO flag hanging over the ships in the harbour in Gibraltar, and other nations using Gibraltar International Airport to help service their operations elsewhere."

"If we could achieve that while retaining the controls we have over what goes on in Gibraltar and how we use the facilities here, which is a red line for the United Kingdom, then that must be in the interests not only of the United Kingdom and Spain, but NATO more generally."

The discussions come at a time when the Ministry of Defence has boosted it use of Gibraltar’s military infrastructure as part of the UK’s ‘Global Britain’ policy and the integrated defence and security review.

A central part of the UK’s new strategy is the projection of “soft power” around the globe, and locations such as Gibraltar play a crucial role as “forward bases” providing logistical support to UK military assets operating around the globe.

"Gibraltar has always been recognised for its strategic position, no more so than now," Sir David said, citing threats ranging from the increased Russian presence in the Mediterranean, to tensions in the east Mediterranean and the Sahel regions, and the challenges of migration.

"Gibraltar provides that secure forward base from which defence assets can operate.”